Men’s seniors roll out in style in overtime win 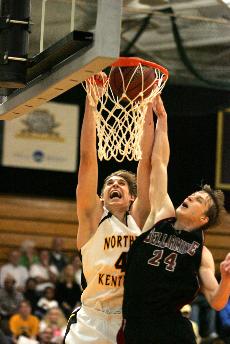 It was fitting for the men’s basketball game to end in overtime, Feb. 19 at Regents Hall, as Northern Kentucky University defeated Bellarmine University 91-82, in a Great Lakes Valley Conference bitter rivalry.

After all, it was Senior Night for the Norse who honored five members of the team prior to the game. Seniors Kevin Schappell, James Cripe, Anthony Teague, Steven Wright and team manager Nathan Rutledge came out for one final home game, and one final cheer from the fans.

Wright started the game well for the Norse, scoring 12 of the first 23 points. He was able to receive help from teammates during the second half when the Knights’ defense held him scoreless until the final minute of overtime, finishing with 17 points on the night.

“We came out aggressive for Senior Night,” Wright said on his thoughts of the game. “We were all jacked up before the game and wanted to go out with a bang. I let the game come to me and got the ball to everyone, and Billy (Finnell) came through for us tonight.”

Guard Schappell came on late in the game providing seven of the first 12 points in overtime, finishing with 18 points overall. The emotions were overwhelming for Schappell when asked about the win. “Being a senior, I did whatever it took to help win the game tonight,” he said.

Schappell will be moving on to Kansas State University Basketball to be on the coaching staff. “It is a great opportunity to be on the staff and I will do whatever it takes to contribute, and I thank God everyday for it,” Schappell said.

Schappell was happy to be playing again with former Loveland High School teammate James Cripe. “It has been great playing with Cripe,” he said. “He always knows where I am at and I know where he is, so it has been a great year playing together again.”

Finnell scored 21 points in the game and helped the Norse tie the game for overtime. After being fouled with 5.3 seconds on the clock, Finnell hit the first free throw, but missed the second one to force overtime.

In overtime, NKU stepped up and outscored Bellarmine 22-13, most of the points coming from the free-throw line.

Cripe, the first 7-foot basketball player in NKU history, got the crowd on its feet with an alley hoop dunk in the second half, with an assist from Finnell. “I am glad to finish that one off,” Cripe said about the dunk. “If I didn’t make that one, he (Finnell) would have killed me.”

When asked about the transition from Division I to II, Cripe was happy with the decision. “It has been a blast and an easy transfer to NKU. The only thing was coming here, I had no experience against these teams, not knowing the players and how they play. I had to ask Kevin and the guys, ‘Who are we playing and how good are they?'” Cripe said.

“Coming here and playing with Kevin, it’s been great, but I am kind of getting sick of him,” Cripe said jokingly.

NKU will finish the season on the road at Saint Joseph College Feb. 22, and with the University of Indianapolis for the season finale, Feb. 24. The post-season begins when the Norse starts the GLVC Tournament, March 1 through 4.