Norse victorious after second half effort 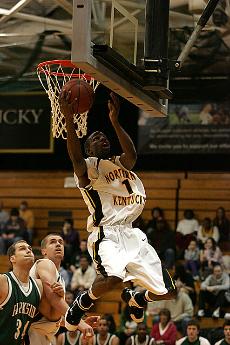 A dominant inside presence, persistent shooting, and an overall gritty second-half performance could all be labeled as keys to victory for Northern Kentucky University as it defeated the University of Wisconsin-Parkside, 70-66, Feb. 10.

NKU came from nine down at the half, using a 17-8 run in the opening five minutes of the second half, to aid in the comeback. This was a familiar scene for the two teams, this time with NKU on the opposite end of a rally. Earlier this month, UWP came from behind for an 80-73 win in Wisconsin.

Senior guard Steven Wright led the Norse in scoring for the tenth time this season, although he struggled to make shots in the first half going 3-of-9 from the field. However, in the second half he poured in 15 to finish with a game-high 23 points on 9-of-18 shooting.

Along with the scoring of Wright, NKU was helped out tremendously by the play of senior center James Cripe. Cripe, who scored 14 points and grabbed two rebounds, was clearly a defensive struggle for the Rangers.

At 7-foot, Cripe dominated UWP’s tallest player, listed at 6-foot-7, defending in the post. Cripe helped lead the Norse’s run to start the second half, scoring 10 of its 17 points.

The Norse also capitalized on turnovers by Wisconsin-Parkside, who committed 10 of their 16 turnovers in the second half.

The effort and gritty second-half performance by the Norse were very clear to Head Coach Dave Bezold. “I really felt the first half, when we were back on our heels, that we weren’t the aggressor,” Bezold said, according to NKU Athletics. “In the second half, our guys had a lot of pride and they came out fresh and played much harder.”

Although UWP shot poorly in the second half, it didn’t relinquish the lead often. In a game that saw only six lead changes and six ties, the outcome would not be determined until the final seconds of the game.

After Wright hit a jumper to tie the game up at 65-65 with 1:20 remaining, the Norse took the lead on a three-pointer by sophomore point guard Billy Finnell with 23 seconds left on the clock.

“It was a huge shot by Billy (Finnell). I know Parkside did not want Steve (Wright) to have the ball with the game on the line, so Anthony (Teague) made a good pass, and Billy drained it,” Bezold said.

The Norse didn’t give up the lead from this point, though Parkside did have a chance to close the gap after a controversial foul on NKU’s sophomore guard David McFarland, who sent UWP’s junior guard Kyle Clark to the line.

Clark made one free throw to bring the score to 68-66. Teague then sealed the victory for the Norse on two free throws with one second remaining. Teague finished the game with 16 points for the Norse.

With wins over UWP and Lewis University, NKU finished the weekend 2-0. In the loss, the Rangers remain winless in Regents Hall with a record of 0-12.

The Norse improved to 17-6 overall, and 10-5 in the Great Lakes Valley Conference, and remain atop the East Division in the GLVC.