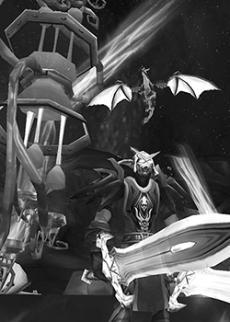 With 8 million worldwide subscribers over its two-year lifespan, developer Blizzard said World of Warcraft (WoW) has not only become the undisputed leader in the massive multiplayer genre, it has transcended the medium and become a bona fide cultural phenomenon. From WoW South Park spoofs to Jeopardy questions, a game that experts predicted fail has surpassed all expectations and competition.

Adding to the brilliance of the game is the much-anticipated expansion, “The Burning Crusade.” Originally slated to be released last November, developer Blizzard held off on releasing the add-on to tweak and fine-tune the product. It was released on Jan. 16 and the delay paid off.

For those not familiar with the concept, WoW is a Massive Multiplayer Online role-playing game (often called simply MMO) that allows gamers to create characters on a permanent online world and interact with millions of other people in the game. An MMO represents a virtual life where everything you do is continued into the next day for as long as you keep your account.

“The Burning Crusade” expands the WoW game world in many ways, but the primary change is the raising of the level cap from 60 to 70, allowing characters to become more skilled and powerful. Players will find that leveling from 60 to 70 will take roughly the same time it took them to level from 1 to 60. Which, if you skip sleep and responsibilities, will take a minimum of four days.

Another reward is the two new playable races: Blood Elves for the Horde and Draenei for the Alliance. The new profession of Jewelcrafting and an immense amount of new items, skills, reputations and rewards to acquire have been added.

Stylistically, “The Burning Crusade” is a marvel. The art design, which has always been a highlight of the game, has been taken to new heights in the expansion. The new areas that Outland (a new land for high level characters) introduces are gorgeous. From the desert scenes of Hellfire Peninsula to the mushroom forests of Zangermarsh, these locales breathe with a sense of the fantastic and do an amazing job of immersing the player into the environment.

Dungeons are similarly well designed. They are much smaller and quicker to complete than the original dungeons in the game, in an effort to cater to casual WoW gamers. Character and creature animations with more lifelike and dynamic zones, create a much more realistic sense of a living, breathing world than the original game did.

The only real drawback to “The Burning Crusade” expansion is the way it will leave the most dedicated, old-school player feeling. Those players who have spent massive amounts of time and effort acquiring the old items and rewards may feel betrayed by the new expansion, as the items they spent the last two years acquiring will suddenly be replaced with new and better items requiring very little effort (or at least, much less effort than their old items took).

One other drawback is technical, with so many players on the original servers, extreme lag and server crashes occur during prime time hours. However, this will be only a temporary problem as Blizzard is working on the issue, performing realm splits and free character transfers to new realms to make for less server traffic.

There may be other MMOs on the market, but World of Warcraft, with its new expansion “The Burning Crusade,” is the gold standard. In short, this game is something everyone should try, but be careful: it’s extremely addictive, so handle with care. For being the best expansion to an MMO on the planet, “The Burning Crusade” earns a perfect 10 out of 10.