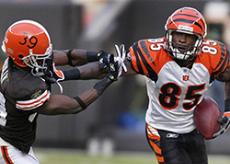 The Cincinnati Bengals came into the game 5-5 Nov. 26 with a desperate need for a win in order to keep any hope of a playoff chance alive. The Cleveland Browns came in at 3-7 and last in the American Football Conference North Division; its season was over in every sense of the word, but for the Bengals, this game meant everything.

Cincinnati got the job done by holding Cleveland 30-0, but in the beginning of the game, Bengals fans got a little scared.

In the opening kickoff, Cleveland’s Josh Cribbs ran the ball 101-yards for a touchdown, which gave the Browns a 6-0 lead, but was called back due to an untimely penalty. That would be the closest any Browns player would ever get to seeing the end zone, or points for that matter.

After the Browns punted on its first possession it saw the Bengals drive the ball down its throat with Rudi Johnson having runs of 10, 12 and 5 yards on his first three carries. Rudi Johnson eventually found pay dirt on a fourth-and-goal on the 1-yard line to make it 7-0, Cincinnati.

The fan-favorite Chad Johnson, aka “Ocho Cinco,” finally got in the action during the second quarter with a 12-yard reception. Eventually, that led to Chris Henry’s first Touchdown; a 7-yard strike from Carson Palmer with 12:02 left in the second quarter, making the score 14-0.

After a missed 48-yard field goal by the Browns, Palmer hit Chad Johnson again, this time for 43-yards down the middle. That reception set up Shayne Graham’s field goal making the score 17-0.

The Bengals came out and started the second half right where it left off. Palmer marched the offense down the field and T.J. Houshmandzadeh was on the end of Palmer’s 6-yard Touchdown pass, but the Browns blocked the extra point, making it 23-0.

In the Browns’ first possession, the team tried to get the first down on fourth, hesitant to kick a field goal due to a prior miss, but they ended up turning it over to the Bengals after not getting enough yardage for the first down.

Tory James spoiled the Browns’ next possession with an interception coming with 4:49 left in the third quarter.

Palmer made his only mistake of the day when he threw a pick to Browns’ safety Brian Russell, but the Browns gave it right back to the Bengals once again with another interception by James. Palmer let that last pick roll off his back like water as he threw his third Touchdown pass of the day to wideout Henry on the first play in the fourth quarter.

The Browns were physically beaten down on their next offensive series with two straight sacks and then a jarring hit on Dennis Northcutt by the Bengals’ safety Madieu Williams, causing a fumble recovered by defensive end Justin Smith. Kevin Kaesviharn intercepted Charlie Frye one more time with 1:51 left in the game, his second INT of the game. The Bengals ran out the clock with conservative running plays and the scoreboard reading 30-0 in favor of Cincinnati.

The Bengals got a much needed win and a nice confidence booster going into the next game against the AFC North leading Baltimore Ravens at Paul Brown Stadium Nov. 30.

The Bengals team has its hands full at the moment fighting for a playoff spot and possibly a share of the AFC North Divisional crown, but it will have to go through Steve McNair and the rest of the Ravens to do so. It’s crunch time for the Bengals. Can Marvin Lewis keep his team on the winning track and get it back in the playoffs? Find out Nov. 31 at 8 p.m. in the Jungle.