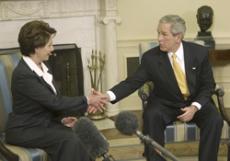 WASHINGTON (AP) – President Bush and House Speaker-to-be Nancy Pelosi, perhaps the biggest loser and winner on Election Day, pledged over lunch Thursday to bury the hatchet and cooperate. When possible.

At the White House, where Bush had invited Pelosi for lunch, presidential aides joked that there was no crow on the menu for Bush to eat.

Bush ate a little anyway, and he saluted Pelosi, not only as Tuesday’s victor but as the first woman who will ascend to the position of House speaker, next in line to the presidency after the vice president.

“The elections are now behind us, and the congresswoman’s party won,” Bush said. “But the challenges still remain. And therefore, we’re going to work together to address those challenges in a constructive way.”

Said Pelosi, like Bush all smiles: “We both extended the hand of friendship, of partnership to solve the problems facing our country.”

The president and his guests sat down for a make-nice luncheon of pasta salad and chocolate in Bush’s private dining room off the Oval Office.

Later in the day, Bush telephoned Senate Minority Leader Harry Reid to congratulate him on the Democrats’ takeover in the Senate as well. The switch in power in that chamber became sure Wednesday night, when enough votes were counted to confirm the defeat of Virginia GOP Sen. George Allen. Reid, likely to be majority leader in the new Congress, was getting his own meeting with Bush at the White House on Friday.

Meeting reporters in the Oval Office, Pelosi and Bush shook hands for the cameras. The president and the woman whose party beat his this year leaned forward in their silk-upholstered seats. They promised cooperation in a government that, come January, will be divided between a Republican White House and a Democratic Congress.

Though the two sought to show they were putting the barbs in the past, they did not ignore the differences that they debated so hotly before the voting.

Pelosi has made clear that House Democrats will move immediately on their agenda, much of it opposed by Bush, which includes cutting student loan interest rates, funding embryonic stem cell research, authorizing the federal government to negotiate lower drug prices for Medicare patients and imposing a national cap on industrial carbon dioxide emissions.

She also has said that the election results mean Democrats not only want – but expect – Bush to make a change of direction in Iraq .

“I look forward to working in a confidence-building way with the president, recognizing that we have our differences and we will debate them,” Pelosi said at the president’s side. “We’ve made history. Now we have to make progress.”

For his part, Bush has said that he’ll listen to all suggestions on Iraq, except for those that involve pulling troops out before the mission is complete. He also says he still wants congressional approval for war-on-terror tools that Democrats have vigorously questioned.

As Bush’s press secretary, Tony Snow, put it, echoing what Bush said a day earlier, the White House’s intention is to cooperate but “don’t trim back on your principles.”

Bush and Pelosi have met dozens of times before. But with both just getting accustomed to new roles with each other, aides to both said it was more of a tone-setting session than a time for brass-tacks negotiating.

They talked briefly about Iraq, without exploring specific policy changes. They discussed at length the degenerating situation in Sudan’s violence-wracked Darfur region.

Pelosi told reporters later that she suggested targets for initial compromise that are favorite subjects of the president – increased production of alternative energy, an immigration policy overhaul and ways to make American workers more competitive in the global economy.

She said Bush did not raise the issue of getting his warrantless domestic eavesdropping program approved by lawmakers. But, proclaiming that “you have to govern from the center,” she said agreement with the White House is possible.

Both have much to lose if they do not find agreement somewhere.

Democrats are getting a chance to control Capitol Hill, and they believe voters could take that privilege away in two years if they don’t use it well.

Bush, meanwhile, will lead with a Congress entirely in the other party’s hands for the first time in his presidency. It could have him reaching back to his experience as governor of Texas, when he cultivated friendships with top Democrats in the state Legislature – and to his 2000 campaign promise to be a “uniter not a divider.”

Before Tuesday’s election, Bush and his aides were asked repeatedly if they could work with a Speaker Pelosi, or even whether they were preparing for such an eventuality. They refused to answer. “That’s not going to happen,” Bush once snapped to an interviewer.

But times have changed and so has the White House’s reply. Said White House counselor Dan Bartlett: “We’re definitely going to try.”