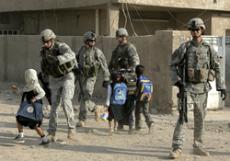 STOCKTON, Calif. (AP) – President Bush tried to focus voters on the fight against terror Tuesday and away from the ethics questions that are making the Republican election campaign difficult this year.

But even if Bush can’t erase his party’s problems, he provided plenty of cash to fuel their cause in November’s elections. His fundraising told for three events Tuesday was $2.3 million.

He told cheering Republicans at a $400,000 breakfast fundraiser for Rep. Richard Pombo that Democrats would raise their taxes and “cut and run” in Iraq.

“They talk tough on terror, but when the votes are counted, their softer side comes out,” Bush said. He made the same charges later in the Sacramento suburb of El Dorado, where he raised $600,000 for Rep. John Doolittle.

Bush criticized Democrats who voted against legislation authorizing warrantless monitoring of phone calls and e-mails to detect terror plots and another bill that would allow tough interrogation of terror suspects by CIA agents.

“If they feel we are safer without this program, the Democrats in the United States Senate need to explain to the American people which of the attacks that the CIA program stopped would they have been willing to let go forward,” Bush said.

Senate Democratic Leader Harry Reid of Nevada said despite all Bush’s talk about being “tough,” Republicans have put national security at risk by bungling Iraq and ignoring warnings of the Sept. 11 attacks five years ago.

“The American people expect more than tough talk from their leaders,” Reid said in a written statement e-mailed to reporters. “They expect tough and smart action.”

Bush didn’t mention the two Republicans’ link to Abramoff. Both easily survived primary challenges this year from opponents who criticized them for their Abramoff donations, and both were expected to win in their reliably Republican districts in November.

Pombo received thousands of dollars in questionable contributions from Abramoff or his clients while supporting the lobbyist’s causes. After the disclosures, Pombo gave $7,000 to charity that he had received from Abramoff. The congressman had denied taking any positions because of the money.

Doolittle used Abramoff’s luxury sports box for a fundraiser without initially reporting it. Doolittle’s wife and one of his former aides also worked for Abramoff.

Several hundred protesters lined Bush’s motorcade route to the country club where the Doolittle event was held. Some greeted the president with welcome banners and signs that said, “We Stand with Congressman Doolittle.” But the pro-Bush protesters were outnumbered by those who carried signs that read “No More Lies,” “War starts with Dubya” and “Iraq Another Vietnam.”

During a stop in Stockton’s three-year-old George W. Bush Elementary School, Bush made his first comments on the revelations that Rep. Mark Foley, R-Fla., had sexually explicit Internet messages to teenage boys he met through the congressional page program. Foley resigned Friday when ABC News obtained copies, and House Speaker Dennis Hastert and other Republican leaders are facing questions about why they didn’t pursue the matter earlier.

Bush said he was “dismayed and shocked to learn about Congressman Foley’s unacceptable behavior.” Some, including the conservative Washington Times newspaper, have called for Hastert to resign, but Bush expressed confidence in the speaker’s ability to resolve the matter.

Bush’s final fundraiser was scheduled for Tuesday evening at a mansion in Beverly Hills. The event, hosted by investor Elliott Broidy and his wife Robin, was expected to raise $1.3 million for the Republican National Committee and was closed to the media.

The president was to wrap up the fundraising tour Wednesday with stops in Arizona and Colorado before returning to Washington.