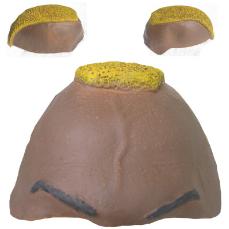 Starting at a young age, some people dream of being star athletes. What a life it would be to make millions just by playing your favorite sport. You would have everything you’ve ever wanted. It would be nice to even look like another one of your favorite star athletes; 6-foot-1, 192 pounds of pure muscle and a stylin’ gold Mohawk.

Oh, yes — wide receiver of the Cincinnati Bengals, Chad Johnson, has it all. It has been hard not to notice the golden strip down the middle of his head, but it seems that people can’t get enough of it. He said that he grew it for the fans, but I guess he thinks they want a little more.

So, Johnson, along with KCB Sports Marketing, presents the Chad Johnson Golden Child Mohawk. You heard right, ladies and gentlemen; you too can look like the golden wide receiver. The Bengals Pro Shop is selling the rubberized scalp for $30. Not only do you get the stylin’ new ‘do, but also Johnson’s replicated veins and eyebrows.

According to Emma Schmidt, an associate of the Pro Shop, it has been selling a lot, especially when it came out a couple weeks ago.

In Dayton Daily News, Johnson said, “It’s for all the kids out there whose parents don’t want them to have real Mohawks.” I say it is a toy to support the Bengals, or better, throw on a #85 football uniform and the rubber scalp for a nice Halloween costume!

You can look like a star athlete, even if you’re not 6-foot-1 and 192 pounds of pure muscle; at least the hair, veins and eyebrows are a good start!

Jami Patton is the sports editor for The Northerner. You can e-mail her at pattonj1@nku.edu