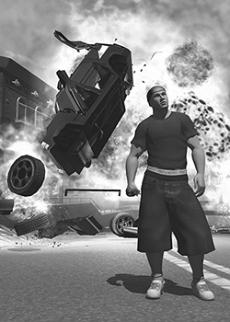 Every semester, professors impress upon students what a horrible offense plagiarism is, by telling them to avoid it at all costs. What they don’t tell students is that in the world of entertainment, plagiarism makes money. Case in point: Saints Row, THQ’s new release on the Xbox 360.

Saints Row unabashedly rips off everything the Grand Theft Auto series has presented since its third installment. This is hardly new in the realm of gaming because, since GTA 3’s release in 2001, the market has been flooded with half-baked, poorly executed clones of the extraordinarily popular and controversial series.

However, this time the game is actually good. In fact, it’s great.

GTA fans will love this game. Saints Row replicates nearly everything about the GTA world and nails nearly every facet in a wonderfully executed way. In some areas, such as the controls and camera, it actually does a little better.

Graphically, it is far superior to its GTA forefather, as the capabilities of the Xbox 360 allow much greater draw distances, higher resolutions, more fluid animation, higher polygon counts and less aliasing than the GTA series did on the underpowered PS2 platform. In short, the graphics are excellent and present a highly immersive urban city in which to create violent mayhem.

In terms of content, this is unquestionably an adult game. Just like the GTA series that it so faithfully emulates, Saints Row is full of violence, sex, drugs and blood. Players begin as a low-level gangster working his way up the ladder with missions that involve killing rival gang members and selling drugs, something that would get you 25 to life in the real world. Gunplay battles escalate to John Woo-esque levels of craziness (think of the teahouse scene from Hard Boiled), adding to the frenetic pace of the game.

This game delivers on every level for the action junkie, despite a couple of the mini games’ slow pacing. In short, this game is not for the young, the squeamish or the morally defensive. However, it is the perfect refuge for those willing to leave reality for a while and do things that are unthinkably reprehensible in real life.

While this game is nearly a carbon copy of the brilliant formula Rockstar pioneered, it does fall short in two areas. This game doesn’t have the style GTA does. The dialogue often seems hollow and cloying, and overall doesn’t feel anywhere near as cool as GTA.

The game’s music fails as well. The GTA soundtracks are masterpieces in their own right, but the selection of songs for Saints Row, with the exception of a few tracks, is terrible. Players will likely turn off the music early on, as the songs’ low quality and repetition become annoying very quickly. Luckily, players can opt to listen to playlists stored on a connected computer in lieu of the awful game soundtrack.

In the end, THQ proves that plagiarism can actually lead to a good product. However, execution is everything, and by staying true to the formula and nailing 99 percent with flawless execution, this title succeeds where other GTA clones have failed. Saints Row will certainly fill the void within this genre until the much anticipated Just Cause and Grand Theft Auto 4 are released.

In the meantime, this is a perfect pickup for fans of the sandbox/gangster genre, considering that genre hasn’t seen a release of this caliber in two years. While the story and dialogue won’t win any awards, the overall experience definitely rewards players. For not only daring to step on Rockstar’s turf, but actually pulling it off, Saints Row scores an 8 out of 10.