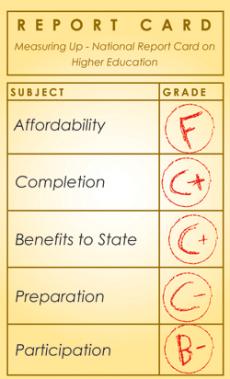 Every year Northern Kentucky University students are striving for the perfect grades. They cram for tests, attend classes and sleep only when projects are finished. While students are rushing around, so is NKU.

Colleges get graded too. These grades are a little different, however. They aren’t something that can be studied for. Every few years, statewide college statistics are graded and compared to other states. Unfortunately, this report card doesn’t come in the mail, so there is no hiding it from parents.

Kentucky received its National Report Card on Higher Education last week. The state was graded in six categories: preparation, participation, affordability, completion, benefits to state and student learning. According to the Web site Measuring Up, National Report Card on Higher Education, Kentucky’s performance still lags many states. The report card allows for comparisons in both the individual categories and for comparisons with both other states and internationally.

This year’s grades reflect a state that has been less than studious. Kentucky received an F in affordability this year.

“College affordability is a national problem, not just Kentucky or NKU,” said Daryl Wright, director of Institutional Research at NKU.

Although the Kentucky received passing grades in both participation and preparation, failing in affordability is quite a challenge. The statistics used for this grade include a family’s ability to pay, strategies of the state for affordability and reliance on loans. Wright said that affordability is an issue NKU sees as important for the students it serves, as well as an issue that they deal with in university planning.

“On the value side of the cost-value equation, NKU compares very well to other universities,” Wright said. “Our up-close-and-personal approach to students sets us apart from other campuses.”

For instance, one value that students at NKU are receiving for their tuition increase is the funding of the new Student Union.

When comparing three individual schools, NKU, University of Kentucky and the University of Louisville, the tuition is drastically different for undergraduate, resident students. According to each university’s Web site, tuition at NKU per semester is $2,724, the U of L is $3,126, and UK is the most expensive of the three with $3,255 for students with less than 59 hours, or $3,349 for students with more than 60 hours. According to the report card, Kentucky has made no significant progress in providing affordable higher education. However, each one of these universities is still lower than Kentucky’s average, which is $5,132.

“NKU compares well cost-wise to other universities that our students might have chosen,” Wright said.

Failing in one category does not mean that Kentucky is a failure in higher education. In both the completion category and the benefits to state category, Kentucky received a C+. In the completion category, the report looks at the number of students persistent in their education and the number that actually complete it. The benefits to state category looks at graduates and their participation in the state of Kentucky, as far as their economic status and their voting participation.

Kentucky has also risen its score in participation. Kentucky received a B- this year. It shows that Kentucky continues to increase its resident’s participation in higher education. This reflects the participation of every age, both 60 percent young adult and 40 percent working age adult.

“The challenge is to maintain the up-close-and-personal value, while dealing with affordability issues,” Wright said.