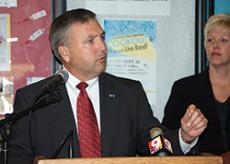 The campaign is part of a 10-state education project organized by the National Lieutenant Governors Association. It is meant to raise awareness about cervical cancer and Gardasil, the new vaccine that helps prevent the cancer and other diseases caused by the Human Papillomavirus (HPV).

“This is an initiative unlike many others. This one will save lives if we get the message out and the awareness raised,” Pence said. “I’m all to happy to be involved with it.”

Through this campaign, lieutenant governors across the nation are traveling to speak at various locations, including many college campuses.

Cervical cancer is a disease that if not treated, can be life threatening. Though only women can contract the cancer, Pence said it affects everyone. “Everyone, whether they are male and female has an interest in this. Males have mothers and daughters. I happen to have three daughters,” Pence said.

President James Votruba joined Pence at the press conference, stressing the importance of this issue. “This is a lock-down curable form of cancer,” Votruba said.

Julia Hurst, executive director of the National Lieutenant Governors Association is working the campaign in all 10 states, but expressed enthusiasm about Pence being at NKU. “It’s wonderful to finally have a campaign like this in our own state,” Hurst said. “After about a two-year process, this issue came to the forefront