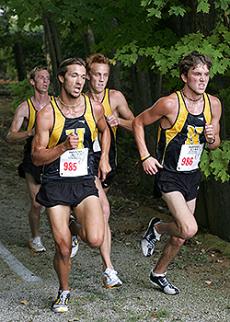 “Perfect scores rarely occur because it is sometimes hard to get a team’s five runners at the top,” said Northern Kentucky University junior and Great Lakes Valley Conference Runner of the Week Rose Jepkirui.

Count this as one of those rare times as both the men’s and women’s cross country teams pulled off perfect scores at the Norse Cross Country Classic Sept. 15 at A.J. Jolly Park, the first in the program’s history.

A perfect score is the highest obtainable score in cross country when the top five runners on a team place one through five. The first place winner gets one point; the second place runner gets two points, and so on, making a combined total of 15.

Jepkirui, who has been running for three years, was tops in the women’s category with an overall time of 19:00, and she was closely trailed by fellow junior teammate Julianne Hoekzema who finished just eleven seconds behind Jepkirui.

Following Jepkirui and Hoekzema were freshman Jenna Siemer crossing the finish line in 20:04, freshman Janice Laker close behind at 20:22 and sophomore Kira Cooper turning in a time of 20:37 to round out the top five.

That teamwork showed itself on the men’s side of the eight kilometer event as well. Sophomore Matthew Shoulta took first place with a time of 26:26. Sophomore Zach Koehler finished second with a time of 26:33, just seven seconds behind Shoulta. Placing third, fourth and fifth for NKU, respectively, were junior Brad Bullock with a time of 26:46, junior Keith Knapp posting a time of 26:54 and junior Adam Stoppelwerth finishing in 27:10.

NKU Cross Country returns to action September 30 as they head South to Pensacola, Fla. for the NCAA Division II Pre-Nationals.