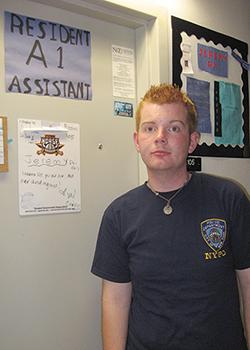 In Jeremy Phillippi’s first few weeks as a residential assistant, he’s held floor meetings, planned events, handled roommate conflicts and dealt with vandalism – just as he learned during training. What he didn’t learn, however, was what to do when he became the center of the conflict.

At around 12:30 a.m., Aug. 28, Phillippi reported that while he was settling a conflict in Commonwealth Hall, someone vandalized his door and his bulletin board outside his door, which he is responsible for decorating each month as an RA.

Phillippi, who is openly gay, told University Housing and University Police that someone wrote with a black permanent marker, “Fuck you fag. I hope you get AIDS,” on the door to his room and tore down the decorations on the bulletin board that featured back-to-school and “Get to know your RA” information about Phillippi, which listed his involvement with Common Ground and other gay/straight alliances in the area.

“It’s been hard to stay with a professional line and stay positive,” said Phillippi, who just started his second year at Northern Kentucky University and his first semester as an RA in Kentucky Hall’s first floor A wing.

Phillippi filed an incident report with the University Police Aug. 29, but had already cleaned the writing off of his door. Police were unable to take any evidence of the writing, but took a dry-erase board that had been scribbled on, according to Phillippi.

Now, weeks later, Phillippi said he’s still dealing with his feelings of the incident and the how University Housing and NKU handled it.

“I feel like I’ve been victimized three times,” he said, since Phillippi felt the both the administration and University Housing didn’t respond appropriately.

Dissatisfied with the response, Phillippi contacted Kentucky Equality Federation, which advocates equal rights and is located in Florence, Ky. The federation posted an alert on its Web site asking visitors to sign an e-mail directed “to Northern Kentucky University demanding campus management assume a more ‘hands on’ role in the investigation of a hate crime, bullying and vandalism incident directed to a member of Common Ground.”

The e-mail asks the university to issue a public statement condemning the incident and include consequences for people who target students because of their sexual orientation.

“It’s hard to say whether the incident was motivated by hate or not,” said University Housing Director Matt Brown. “I consider it to be an act of intolerance.”

Brown said the incident is the first time an anti-gay act of vandalism toward an openly gay student has happened at NKU.

University Housing conducted an investigation separate from University Police and found no evidence supporting Phillippi’s testimony, since the writing was cleaned shortly after its inscription.

Dean of Students Kent Kelso met with Phillippi regarding the incident and said the university has taken no action because it “cannot confirm that any incident even occurred.”

Kelso said University Police has not found evidence of vandalism or the alleged statement written on the door.

He said it’s unfortunate if Phillippi cleaned the writing off before police arrived because now he has no evidence to support his story.

“I don’t think its appropriate to do anything, especially if we have no evidence,” Kelso said.

Kelso remained firm that the university will take no action as a result of the incident.

“It sounds like Jeremy wants us to do something based on his word alone,” Kelso said. “We just don’t do that.”