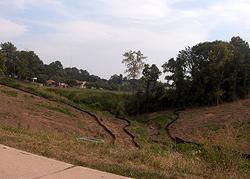 The Northerner’s recent article “Tests Show Arena Work Not Hurting Wildlife” ignores the fact that just because nothing is wrong with the soil does not mean that the denuding of a hillside habitat has not hurt wildlife. This article reads more like propaganda than news. I was not aware that this newspaper provides political cover to the Northern Kentucky University.

I am sure Dr. Rebecca Evans did not mean to imply that the displaced animals (the ones who dodged the dozer attack) would not be impacted when they crossed the street to relocate in their neighbors’ territory. I am sure she would indicate that these arena refugees will be competing in an even smaller ecosystem for the limited food supply and shelter. I would hope she would also indicate that, although no endangered species were found, the total population of the indigenous fauna would be reduced over time through starvation and disease to an amount the remaining ecosystem can support. Although not listed as endangered by the government, these former hillside residents are certainly endangered by the expansion of NKU. Nor does the netting in the trees sounds like a particularly invasive way of checking for endangered species. To pretend otherwise is just dishonest.

Of course, you don’t need to be a tree hugger to point out these facts. Anyone with half a brain knows that when you deforest a hillside to replace it with non-native landscaping and surround it with asphalt parking lots that you have altered the ecosystem forever. The mature trees that were torn out and hauled away will take years to grow back. They were animals’ homes and food sources. The man-made replacement landscape, though perhaps pleasing to the developer’s eye (and pocketbook), provides a sterile landscape that will not support the same number or type of creatures that had lived in the previous forest.

Obviously, the university believed the need for a new arena was more important than retaining the green space surrounding the university. That is a legitimate position. However, the claim that our friendly woodland friends are not harmed by this decision is not an argument that should be made. To promote such a position is not journalism but propaganda. It is unfortunate that the paper chose to pursue such an agenda.

To correct this misstep, I would like to see The Northerner Staff champion an effort to landscape the arena area with native flora capable of providing food and shelter to a wide variety of species and to create a wildlife-friendly environment that would not replace what has been lost forever, but may at least mitigate the damage done.