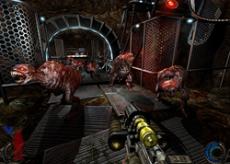 In the venerable first person shooter genre, where players experience the gaming world through the eyes of the main character, innovation rarely occurs. Since the days of Wolfenstein decades ago, little more than multiplayer features have been added to the genre. But Prey, Take-Two Interactive’s new release for the Xbox 360, adds new ideas into the tired genre, albeit with mixed results.

Prey’s story follows Tommy, a disillusioned Cherokee who is unhappy with life on the reservation, at odds with his traditional-minded Grandfather and secretly in love with longtime friend Jen. When aliens abduct his reservation, Tommy must, like so many other gaming heroes have, run around, do things, and eventually rescue the princess… er, girl.

However, the game does deliver some new twists to the genre. Death no longer brings the player to a continue screen. Instead, upon dying the player immediately goes to a ‘spirit world’, where a quick mini game refills the health bar based on how well the gamer does. Once it ends, the player returns to where he died and is immediately back in the action. Prey also casts a new light on the FPS genre with its creative use of gravity. The player can walk along paths on the walls and ceilings, and some switches drastically reorient a room. The mechanic may seem strange, but its unique effect on combat and exploration are astounding.

Still, FPS fans who enjoy simple, run and gun corridor shooters, such as Doom or Halo, should steer clear of this game. Players looking for shooters with pure, nonstop, visceral action are better served by replaying their copies of Serious Sam. Prey focuses on atmosphere and puzzles, but the game’s shooter aspect suffers for it.

This approach produces a slightly better than lukewarm game, but it ends up feeling schizophrenic. Certainly, the immersive atmosphere is Prey’s high point. Crisp, stunning graphics make the alien ship convincing and compelling. The sound is also excellent, and the servicable voice acting never pulls the player out of the moment. Unfortunately, Prey’s puzzles do.

The game’s puzzles feel overdone. Gamers quickly fall into a pattern of shoot a few enemies, solve a puzzle. Shoot a few more enemies, solve another puzzle, continuing ad nauseum. Rarely do players engage in the long, adrenaline-filled fights found in better shooters such as Halo. The puzzles abruptly interrupt the action, preventing Prey from achieving the high it could have. Also, though none of the puzzles are intense brain busters, players will still stand idly in many a room trying to figure out what to do to continue forward. Whether this is frustrating or fun depends largely upon personality and taste. Personally, if I wanted puzzles, I’d play Myst, and I suspect most gamers feel the same.

The player’s arsenal in Prey consists of creative alien armaments that don’t require reloading, which is a big plus. Unfortunately, the weapons never seem very different from one another, and their visual and audio effects are not as intense or satisfying as those found in other FPSs.

Prey scores points for gorgeous visuals, excellent audio, immersive atmosphere, and outside the box thinking on gameplay. But the weapons seem too similar and too weak, and the gameplay balance switches between puzzler and shooter too quickly and too often. Fewer puzzles and a better pacing would have made this game as memorable as the all-time greats of the genre. Nevertheless, mechanically and visually the Prey is sound, solid and a respectable offering to the currently slim Xbox 360 library, earning Prey a 7.5 out of 10.