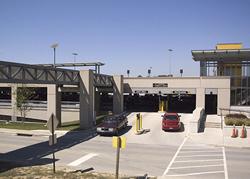 “I hate it,” said the junior English major. “I want to know where the money is going.”

According to Julie Hess, interim parking supervisor, the Transportation Committee decided to raise the cost of passes to pay for maintenance of the parking lots and adding additional spaces among other everyday things.

While this rise may hurt the pocketbooks of many struggling college students, the garages on campus are now free to students who own a parking pass.

Instead of paying a dollar with their all-card, or two dollars without it, those with a parking pass merely have to swipe their all-card on the way out of the garage, with no cost to them.

“If you purchased a permit, why should you pay an additional fee to park?” Hess said.

While pass holders can now use the garages free of charge, visitors will still have to pay two dollars when exiting the garage.

“I think it’s absolutely ridiculous they’d take more than have our parking and charge us more,” said Jessica Haouk.

The senior photography and women’s studies major said she’s upset about the increased prices on campus in general.

Due to the construction of the new Student Union, Lot A, which consisted of about 270 spaces, was shut down last semester. However, according to Hess, “the loss of those spots are being made up where the tennis courts used to be.”

The tennis courts are now being relocated near the softball fields.

Just as it has been in the past, anyone parking in the lots or in the garage without displaying a parking or visitor’s pass will be issued a citation by University Police.