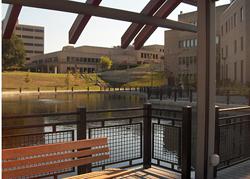 Northern Kentucky University had a busy summer. From a presidential visit to continued construction, students who spent the summer away from campus missed a lot. Here is a wrap-up of what happened while students were away.

Northern Kentucky University’s Lake Inferior has completed its new look – and has a new name.

According to Deidra Fajack, director of programs, the name Loch Norse won people over with 628 votes. The other possibilities included Lake Legacy, with 234 votes, Lake Valhalla, with 223 votes, Lake Odin, with 163 votes, and Lake Superior, with 107 votes.

Alumni were also invited to vote because the university “wanted to make sure that alumni had a voice in the renaming, since so many of them remember the original lake,” Fajack said.

The privately funded $2.4 million renovation of the lake and building of an amphitheater is now complete. According to Fajack, “the lake was renamed to reflect the great improvements made to that area of campus.”

A formal dedication is scheduled for Sept. 6, according to Steve Nienaber, director of Architecture and Construction Services.

Dr. Sally Jacobsen and six of her students who participated in the dismantling April 12 were charged with theft by unlawful taking and criminal mischief, both classified as misdemeanors. Jacobsen was also charged with criminal solicitation.

The university placed Jacobsen was placed on a paid leave of absence for the remainder of the spring semester. She retired in May.

At her pre-trial hearing May 23, Jacobsen was ordered to go to mediation with NKU officials, the Northern Right to Life student group and the Student Government Association.

The mediation was successful and Jacobsen agreed to pay $270 in restitution for the stolen and damaged goods and to make a $1,000 donation to the Madonna House, a non-profit organization that helps single pregnant women. She also agreed to make a written apology to Northern Right to Life and to the owners of the crosses, the Von Handorf family and Mary Wigger, an owner of the crosses.

For Jacobsen, the successful completion means the charges against her are dropped. The six students who were charged were ordered to do community service and write an apology and have it published in Viewpoints section The Northerner.

After these stipulations are completed, the misdemeanor charges against the students will also be dropped.

Despite setbacks during the summer, both the new Student Union and the Bank of Kentucky are still slated to open in May 2008.

In less than a year, Northern Kentucky University began building the two new additions to campus.

According to Steve Nienaber, director of Architecture and Construction Services about three months were lost due to “unforeseen site utility conditions.”

“Many of the underground utilities which feed the entire campus were located within the footprint of the new Student Union,” Nienaber said. The construction was delayed because of having to relocate the utilities and modify designs.

Started after the Student Union, the building of the Bank of Kentucky Arena is just beginning. The trees that covered the construction sight are now cleared and excavation is just beginning, Nienaber said.

Unlike the Student Union, which is being built by one contractor, the arena is being built by numerous different contractors. According to Larry Blake, assistant vice president of Facilities Management, they “just awarded the contract to start moving the earth, so they’ll start leveling the site now.”

Alongside the location of the arena, the NKU Foundation is developing the surrounding area by building a 100-room hotel, office space, retail shops and restaurants. “The foundation is hoping to start building this fall,” Blake said.

According to Blake, more construction plans are being made for the near future. Initial planning for the College of Informatics building has begun, they have asked for funding for a nursing building and $15 million to renovate Founders Hall.

There is still some room on university land for expansion, but Blake said university officials will be revising the campus master plan to look into buying more land to accommodate the growing campus.