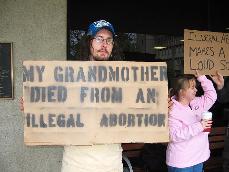 College Republicans Vice President-elect Erin Parker, prior to introducing Wuchner, spoke to the crowd regarding abortion and the fact that college students of today have lost one-third of their generation to abortion, which “is not acceptable,” Parker said. “Human life is not in the eye of the beholder.”

As Wuchner took the podium she urged those in attendance to “be the hands, feet, mouths and voices for the unborn.” She laid out her proposed ban that would make performing an abortion a felony for physicians, calling Roe vs. Wade, the court decision that legalized abortion in 1973, a “flawed court decision.”

Wuchner said several things are being proposed, including House bill 490, which says women should “be fully informed when making her decisions” regarding whether or not to have an abortion. According to Wuchner, many women are not given complete information about what exactly they would be doing if they had an abortion. She said they are not informed of all possible complications and medical risks.

“If women were given more information, they might decide not to have an abortion,” Wuchner said.

The bill receiving the majority of attention, however, is House bill 489 that would ban abortion. The bill, backed by more than 40 of the 100 house members, is meant to uphold the right to life. According to Wuchner, in the constitution “our rights are spelled out, and our right to life is first.” The bill would only make an exception for women whose lives would be in danger because of the pregnancy.

Following the speech, the Northern Right to Life group showed the documentary “The Silent Scream” showing an abortion being performed on an 11-weeks pregnant woman.

Northern Right to Life member Marissa Caldwell said the group hopes through these events people will realize pro-life and pro-choice people have some common ground.