Right to Life group to press charges against protestors 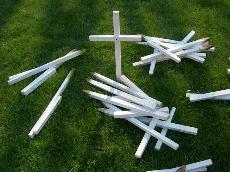 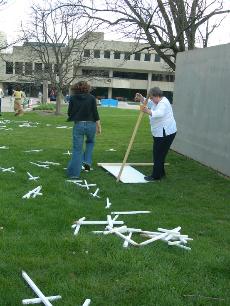 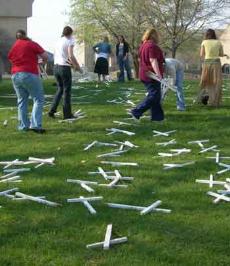 Members of the Northern Right to Life are camping out Thursday to protect their display of anti-abortion crosses, following the damage and removal of the display on Wednesday by protestors.

The group has decided to press charges against those responsible.

“We called the police and told them that we decided to press charges,” said Julie Broering, treasurer for the group. The members reached their decision after a day-long deliberation.

According to University Police reports, several young females removed about 400 white crosses from the grass in front of the University Center plaza at about 5:30 p.m. on April 12.

Northern Kentucky University President James Votruba has confirmed that Dr. Sally Jacobsen said that she encouraged students to practice their freedom of speech by pulling down the crosses during her British Literature class, which meets on Wednesday evenings.

Jacobsen could not be reached by The Northerner deadline.

“I am very disappointed that this happened,” Votruba said. “At a university, the opposing views should be able to bump up against each other. Responding with pamphlets or speeches would have allowed the power of ideas to compete.”

Approximately 10 students accompanied Jacobsen to the crosses and helped her to remove them. The group knocked the crosses down and piled them in trashcans around the plaza, and removed the “Cemetery of Innocents” sign.

Police arrived at 7:15 p.m. and found the crosses in trash cans throughout campus, according to David Tobergte, an administrative sergeant with the University Police. Tobergte said once those responsible for the vandalism of the crosses are identified, they could face felony theft charges. If those responsible for the vandalism are students, then they will also face university sanctions, Tobergte said.

“I profoundly regret that the incident happened. My hope is that we can have a dialogue or discussion on what’s happening on campus with some sense of civility,” he said.

The newly formed Northern Right to Life group at NKU created the anti-abortion display on April 9, and after being notified of the vandalism, the group came to NKU that night to repair and replant the crosses.

In a letter to The Northerner, signed by Nancy Slonneger Hancock, a member of The Educators for Reproductive Freedom, Hancock said that the group “neither knew about nor participated in this act of vandalism, and we most certainly do not condone it.” Hancock said that the group sees the cross display as “protected free speech, no matter how strongly we may disagree with the message. It is of the utmost importance that we all respect each others’ free speech rights.”

NKU officials and university police are currently investigating the vandalism. Police reports list damages at $600; group members stated they paid $1.50 for each cross.