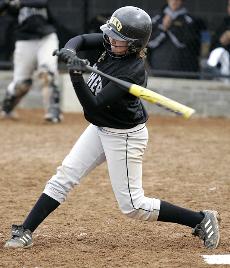 The Norse came out strong in the first inning with Heather Cotner and Sarah King both getting RBI hits. But in the second inning the Saints fought back and tied the score 2-2, with one run scored on a fielding error.

Then in the third inning NGCSU’s Lara Seamon hit an RBI single allowing them to take the lead 3-2. NKU started a rally in the fifth when they loaded the bases and Amanda Smith up to bat. Smith hit a hard shot, picking up two RBI’s and Cara Parker contributed with a hard-hit single scoring one more run.

In the same inning, the Saint’s managed to score one run, but no more. In the seventh, Smith came in to relieve pitcher Candice White and NKU took the victory 5-4. In the next game, NKU took on Valdosta State University.

It seemed the Norse were going to have another win, but the seventh inning proved otherwise. NKU scored their first run on a steal.

Cotner was stealing second and Ricki Rothbauer, who was on third, took off and beat the throw back home. Then King added another run for the Norse with an RBI single. In the second inning, VSU came out strong and scored four runs with two singles, one double and a triple.

The Blazers had snatched the lead 4-2 over the Norse, but in the fourth inning NKU took it back with Rothbauer and Cotner both having two RBI’s.

But, in the seventh, the Norse gave up the victory was given up with errors. VSU scored two runs on a throwing error and one run on a fielding error. The Blazers sealed the win with one more run, winning 8-6 over the Norse.

The next day was different for the Norse. They came out strong and ready to play.

In the opener, they faced VSU. In the first inning, Trele Edwards hit a solo home run, allowing the Blazers to take the lead 1-0. NKU came right back and scored one run in the second, one in the third, and two in the fifth. In the sixth inning, the Norse extended it’s lead when King tripled, scoring two runs and RBI hits from Smith and Parker.

In the seventh inning, VSU put up a fight scoring two runs. Then Smith came in to take White’s place, but in the next play, an error on the throw allowed the Blazers to score two more runs. NKU scored enough runs to have the lead, so they took the win 8-5.

NKU then faced NGCSU, where Smith threw a four-hit shutout. The Norse came out hitting and scored one in the first, once in the third and once in the fourth.

In the sixth inning, Shatona Campbell had an RBI single. Rothbauer also scored one run on a triple and then she scored on a passed ball. NKU took the win 6-0.