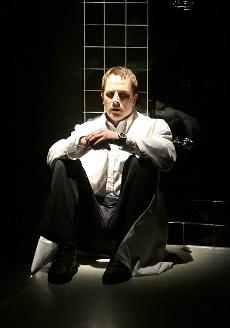 Photo courtesy of Cincinnati Playhouse in the Park 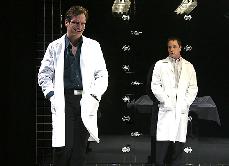 Photo courtesy of Cincinnati Playhouse in the Park

Whether you do or don’t keep tabs on the Department of Theatre and Dance here at Northern Kentucky University, you might have noticed that the playwriting classes almost never feature the same instructor: seemingly, someone leaves, becomes ill, or, you know, simply doesn’t have time to teach the course.

Apparently though, one instructor left to better his career; it shows on a certain stage in Cincinnati.

About two weeks ago, playwright Joseph McDonough’s one of two world-premier plays, “Stone My Heart,” opened at Cincinnati Playhouse at the Park. Recently, McDonough received the Mickey Kaplan New American Play Prize – which is a local award given to playwrights – for this particular work.

Now, if you ever had the opportunity to meet McDonough (or took one of the two classes he taught at NKU last year), you probably perceived him as a rather humble, modest guy who knows his stuff when it comes theatrical writing.

That perception might change once you see “Stone My Heart,” which somehow blends the right amount of shock and humor for a little less than two hours.

A morgue in Chicago, the play’s main setting, is the first inkling that “Stone My Heart” creates a sense of eeriness, which intensifies as the play progresses. Eight body drawers, which harbor a (fake) corpse each, line the upstage wall. The careful use of lighting and shifting of stage props simply change the mood and location of the play (even though you still feel like you’re in a morgue most of the time).

We initially meet Robby and Terrence, two employees of the morgue – and they are the ones who will make or break the play for certain viewers. They carry the story; they bring the issues.

Robby, played by Todd Lawson, is, for the most part, a likeable character. He pines for the sole woman in the play, Jessica, and will literally kill to have her. His uncontrollable stuttering throughout the play became borderline annoying, however, it seemed necessary to maintain the suspense during a few scenes. During his monologues, though, Robby doesn’t stutter. McDonough said he eliminated the stuttering to give the audience a break from the speech impediment, which would lose its effect if Robby never dropped it.

While Robby is an extremely dramatic character, Terrence, played by Sean Haberle, is dramatic, yet he attains an incredible amount of sardonic humor. The hilarity of this character is his similarity to Thomas Church’s character in the movie “Sideways.” Terrence’s persona, shockingly, allows him to get away with such acts as leaving his Red Bull Energy Drinks in a body drawer and spending the night with a corpse (form your own image).

Sure, Marcus is intimidating, Jessica is innocent and luscious, and Zach masters the art of fart humor, but their personas – good or bad – don’t stand up to Terrence and Robby’s. On the flip side, all the characters are enjoyable since they represent (loosely, McDonough said) the main characters of “Othello.”

Regardless, “Stone My Heart” is a well-thought effort. Obviously McDonough spent a substantial amount of time on this Shakespearean-based play. Hopefully, his next play “Wayfarer’s Rest,” which debuts at the Ensemble Theatre of Cincinnati April 19, is just as stellar.

Playhouse in the Park