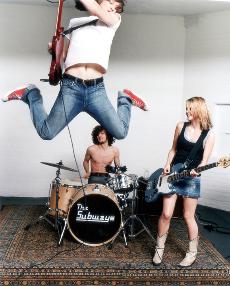 The London trio known as The Subways is among the legions of British bands to recently invade the United States, though making its North American debut in a much more trendy way: via the fictional Bait Shop venue located in the cinematic world of “The O.C.” The show’s depiction of the band’s performance was quite favorable, as most of The Subways’ live performances are well-received. Unfortunately, the band’s full-length debut “Young for Eternity” does not exactly live up to the live show’s reputation.