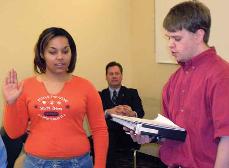 In a prepared statement read by the new SGA President Sheena Dunn at the March 27 SGA meeting, Perry said, “because of personal reasons and issues I have dealt with throughout the semester, I’m submitting my formal resignation.”

Perry’s brief statement did not elaborate on the issues that forced her to resign.

Former Executive Vice President Dunn was sworn in as SGA president for the remainder of the term.

“Jennifer had a combination of health issues,” Dunn said. “It’s going to take time to pinpoint what is wrong with her. Jennifer doesn’t even know at this time.”

“I wish her the best in recovery and in the future.”

Chief Justice Brett Hardebeck swore Dunn in only as the SGA president and said she will not automatically fill the position on the Board of Regents that the president usually does. The SGA constitution makes no provision for filling the Student Regent position in the event a president resigns.

“Our hands are tied,” Hardebeck said. “We can’t give Sheena the position because the constitution doesn’t say we can.”

Hardebeck said the Judicial Council is discussing how to elect a Student Regent.

He said there will be a special election and it may be combined with student government elections April 12 and 13.

All NKU students can run for the Student Regent seat and are eligible to vote for a candidate.

The Board of Regents is comprised of 12 members, with the Student Regent lending the sole student voice.

The board makes all final decisions for the university.

“Students need to think about this,” Hardebeck said. “If they are fed up with certain policies that have been passed like plus and minus grades, now is the time to step up because the position is vacant.”