The audience has eyes for violent horror flick 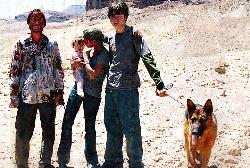 Remaking Wes Craven’s 1977 film, “The Hills Have Eyes,” director Alexandre Aja gives the audience a film that is equal to, if not better than, the original.

While not quite as inventive and unpredictable as Aja’s last endeavor, “High Tension,” this film satisfies moviegoers’ desire for blood, gore, a good plot, scary bad guys and even the oh-so-important-to-horror-films teenage girl in a bikini.

The film, which is slow moving for the first half, is set in the New Mexico desert as a family is sent on an unmapped detour by a shady gas station attendant. A mysterious unfortunate accident leaves the family, consisting of “Big Bob” Carter (Ted Levine), his wife Ethel (Kathleen Quinlan), their daughter Brenda (Emilie de Ravin), son Bobby (Dan Byrd), and daughter Lynn (Vinessa Shaw), her husband Doug (Aaron Stanford), and their newborn daughter, stranded in the middle of nowhere. Of course, no cell phone signal is obtainable because that would end the movie in five minutes.

After realizing they aren’t going anywhere, the unwitting family decides to split up. Carter and Doug start walking in opposite directions on the road to find help, while the rest of the family sets up camp for the night, unaware of the nightmarish cannibal mutants watching them from the surrounding hills. The mutants make their move, and the horror commences as they terrorize the entire family with pure guiltless torture and killing.

These mutants, who the movie later explains are miners, were deformed from government radiation testing in the 1940s and 1950s. Unlike the typical horror movie monster, these mutants are real people who have real lives outside being cannibal mutants. They also have real families, who are deformed as well.

This R-rated movie is deserving of its rating due to its extreme violence and gore, along with overly disturbing scenes such as someone burning alive and a head being blown off. The film portrays one of anyone’s worst nightmares; seeing your family tortured and killed at the hands of cannibalistic mutants out in the middle of nowhere with no help in sight. While the plot plays a little too much on the moviegoers’ sympathy for the newborn, who is put in immense danger throughout the film, overall this film is well done. The film features unexpected twists, believable bad guys, sympathy-drawing victims, and the oh-so-important-to-horror-films teenage girl in a bikini.