Honors class learns value of a good cup of coffee 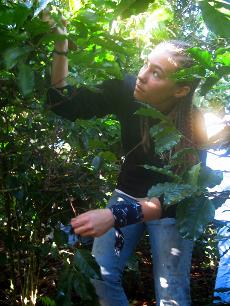 For spring break, seven students in the honors class, World of Coffee, along with the class professor, Jodi Ferner, and her husband John, honors director Tom Zaniello, professors Fran Zaniello and Belle Zembrodt, and two other honors students traveled to the Dominican Republic to visit the organic Finca Alta Gracia, a 60-acre coffee farm on the slopes of Pico Duarte. The farm produces Arabica coffee, which is roasted by the Vermont Coffee Company and sold through Dakin Farm. This is the journal kept by World of Coffee student Amy Ehrnreiter during her stay at the finca.

03.04.06 Estoy aqui! We arrived in Santiago a few hours ago after about a 12-hour travel day. We left from Cincinnati to Indianapolis by bus and flew to Miami and then to Santiago. We are staying in the Centro Plaza hotel for the night and will be leaving for the coffee farm in the morning. I still can’t believe I’m here. I’m standing on the balcony of my room and watching the cars, mopeds and people pass. Upbeat music is blaring in the distance. The engines sound loud and uncared for, horns beep at almost every intersection and the city is alive at almost midnight. There are ants in the bathroom, cobwebs covering the streetlights and litter floating in the streets — and I’m happy. Words can’t describe the excitement I feel.

03.05.06 Today was our first official taste of the Dominican. After a morning in Santiago, we traveled to Jarabacoa, where a huge political rally was happening. I must say, the Dominicans have much more fun with their politics than Americans do. Speaker systems shouted music while cars honked and people screamed and waved anything purple they could find. (I guess that purple is a political party’s color)

After spending lunch in the midst of this rally, we rode up in the bus for part of the mountain, and then continued the trip to Alta Gracia coffee farm in the back of a red pickup truck. We held on as the truck climbed up a dirt road.

The view was like something I’ve never seen before: mountains, trees, rivers and people’s houses in the middle of this amazing scenery. I’m sure they have no idea of the extent of the beauty that surrounds them. The truck stopped and we hiked down part of a mountain to find our cabins nestled sweetly on a hillside overlooking the valleys and a distant Jarabacoa.

After an delicious dinner of yucca and chicken, we entertained ourselves with charades and then settled in our cabins for a cool night in the mountains.

Today was amazing. I fell asleep to raindrops on the tin roof of our cabin and awoke to birds chirping and the sun finding its way through the wooden walls of our cabin. Breakfast was proceeded this morning by a delicious cup of Dominican coffee.

I sipped the brew on the balcony of the common cabin, where we meet together and eat our meals, and watched the fog lift from the mountains. Breakfast came a little later than expected, but “things happen in the Dominican.” Since our meal was late, we were delayed at leaving for the biblioteca – where we were meeting children in the community – so about five children climbed down the mountain to our cabins to greet us with books in their hands ready to read to us. They were so excited that the Americans had come to visit. Celeste, who is a junior in the coffee class, brought out her Frisbee — a game without language barriers — and we threw it around for a while before heading to the biblioteca.

We spend at least an hour letting the children read their Spanish books (“Noah y el Arco” and other children’s books translated into Spanish). We then played with pipe cleaners and crafts, but the children wanted to read to us more than anything. They were so passionate about it.

During the time with the children, 14-year-old Yohan formulated somewhat of a crush on me.

After lunch, while most others were taking a siesta (nap), Celeste, Laura, Jada and I decided to explore the farm for a few hours.

The walking tour of the finca followed our afternoon adventure, where we saw the shade-grown coffee trees and the different planting methods the people on the finca are trying in order to produce the best coffee they can.

We saw coffee trees in different life stages as well as those infested with broca, which is a bug that ruins coffee beans. Jodi promptly squished on of the varmints and declared that she was “saving coffee one broca at a time!”

To wind down our exhausting day, two Haitians from the community came and played guitar for us at the common cabin. Phillimino, the person in charge of the finca, came down to meet all of us, and played and sang for us as well.

This afternoon, Sarah became more than a translator; she also became my godmother through a humorous story written by Yohan. He wrote a story depicting that Sarah and I both fell in love with him and wanted to marry him. He decided that he loved me the most and we wed, with Sarah being our godmother because she said the wedding was OK with her. Oh, the fun I’m having in the Dominican! I feel as if I’m in paradise.

03.07.06 It’s going to be impossible to recap today. Today we picked coffee before breakfast. We met at the top of the hill at 8 a.m. Phillimino and other people from the community were already there picking.

To experience the labor that goes into one cup of coffee was such a humbling experience. We were briefed by Phillimino: only pick the red ones. If they are too dark, they are overripe. If they are too green, they are under ripe. So we spent the morning amid locals picking the ripe little cherries from coffee trees.

Later on, we went to the oficina, where the beans were depulped (the shell removed), fermented (to get the outer shell to come off) and dried. After lunch, during siesta time, Sarah, Celeste, Jada, Laura, B.J. and I hiked up to the community.

We passed locals sitting outside and children playing. I wonder what it is like to not be constantly stimulated. From wireless everything to MP3 players to media at every corner, Americans are so stimulated they wouldn’t survive a week living in this community.

After traveling to the Haitian part of the community for a drink, we passed Dolores’s house and found her and her husband milling the coffee that she roasted for us tonight. Her husband ground off the outer shell of the dried coffee beans and she separated the shell from the bean, so much effort for one cup.

We arrived back at the cabins in time for dinner. After dinner we joined in a sing-a-long of “American Pie” led by B.J., while waiting to see what the plans for the evening were. After a struggle to find a working CD player, the locals and the interns at the finca taught the clumsy Americans how to dance.

So, now here I am, sitting in my bed exhausted. We’re leaving for Santo Domingo in the morning. It’s going to be so hard to leave this place. We’ll be spending the next three nights in Santo Domingo before heading back to the United States.

Adios finca, this has been the best three days.