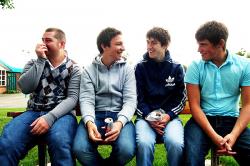 The Arctic Monkeys has barely cut its teeth, yet it is the United Kingdom’s hottest new music commodity, already making history. Hailed by some as the best new garage band, it is also the current record holder for fastest selling debut album in British chart history; not bad for a quartet of 19 year olds who has merely been playing together three years, and barely out of high school.

It was only a matter of time until a band of such caliber made its way across the pond to invade the American music scene.

While the Arctic Monkeys is still fairly underground in the United States and hasn’t quite made it onto the charts, its songs are definitely leaving a mark on the indie dance scene. And why shouldn’t it? A majority of the Arctic Monkeys’ debut “Whatever People Say I am, That’s What I Am Not” is very danceable. What makes the album great as a whole, though, is the way it combines the dance factor with garage rock, old-school punk, a few new wave ideas and even some ska elements.

Comparable to modern cohorts Athlete, The Strokes and We Are Scientists, but also to such classic bands as the Pixies, Devo, and The Clash, the Arctic Monkeys combines many styles, but does it so that the multiple techniques become one semi-original entity.

“I Bet You Look Good On The Dancefloor,” “Red Light Indicates Doors are Secured” and “From The Ritz To The Rubble” are the best garage rock gems of the album, while “Dancing Shoes,” “Riot Van” and “Mardy Bum” change up the vibe of the album, taking on a slower, ska theme. “When The Sun Goes Down” and “A Certain Romance” do a perfect job of combining the two major tempos used, proving to be the strongest songs on the album.

The guitars and vocals are definitely the most notable instruments on the album, with lead player Alex Turner truly taking on the star role of the group. The rest of the members are nothing to sneeze at though, as all of them have the chops and talent to make this band the success it is. While their name may be one of the most terrible the music world has ever seen, the Arctic Monkeys’ music is some of the best to be heard in awhile.