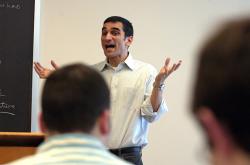 College student Eric Oliver sits in the classroom’s front row, ready to learn about Italian poet Dante and Catholic theologian St. Thomas Aquinas and their views on morality and sin.

But this isn’t a religion, philosophy or literature class. It’s an introductory course in queer studies, and for the next 90 minutes, Oliver and his classmates study the history of same-sex desire, the biology of gender identity and government reactions to homosexual behavior dating to the 14th century.

It’s no longer remarkable that the subjects are taught, but on this day, it’s notable where the discussion is taking place. The classroom is on the campus of DePaul University, the country’s largest Catholic university and, it is believed, the first Catholic school to offer an undergraduate minor in queer studies. The minor became available in January.

“I can see how it may seem like a big step,” said Gary Cestaro, director of Lesbian, Gay, Bisexual, Transgender, Queer Studies, the official name of the minor.

Other Catholic schools, including Georgetown University and Santa Clara University in California, offer courses in the subject, but they fall under Women and Gender Studies programs. The University of Notre Dame offers a course on sex and sexuality in U.S. history that includes discussion on homosexuality and gay liberation.

Several non-religious colleges offer degrees in the subject, including the University of Illinois at Urbana-Champaign, which allows students to focus on queer studies within the gender and women’s studies department.

“Institutions of higher learning, Catholic or not, are about open investigation and free inquiry. DePaul particularly has a strong identity that involves commitment to social justice and to the urban community. At least from that perspective, LGBT studies make a lot of sense here,” Cestaro said.

The new program, which began this semester, comes as religiously affiliated universities are grappling with potential conflicts between contemporary issues and religious values. The Rev. John Jenkins, president of the University of Notre Dame, recently limited the campus’ Queer Film Festival and “The Vagina Monologues” show, requiring the festival to change its name and banning fundraising for the performance.

Jenkins, who wants the Catholic viewpoint represented in discussions of morality, has requested faculty and student input before deciding whether the shows should continue in future years.

Nicholas Lund-Molfese, who works with the higher education agency at the Archdiocese of Chicago, said the archdiocese isn’t necessarily opposed to the program.

While DePaul officials say the minor hasn’t been controversial, it does have critics.

Karl Maurer, spokesman for Catholic Citizens of Illinois, said he planned to send a letter to DePaul’s president, denouncing a program that he contends “validates people in a sinful lifestyle.” Catholicism teaches that homosexual activity is immoral.

“I am very disappointed that anti-Catholic propaganda would be given such a high level of attention by DePaul,” said Maurer, a DePaul graduate. “Keep in mind this is a university that calls itself the largest Catholic school in the country. This is about truth in advertising.”

DePaul has offered several classes through different departments in the past few years, so packaging them together to create a minor made sense, Cestaro said. Students will learn how gay issues are addressed in the fields of history, literature, religion, political science and psychology.

The minor requires that students take an introductory course and five electives, which can include courses in queer theory, history of sexuality in America, queer pioneers and gay and lesbian literature. The nursing department is planning a course on lesbian health, while the religious studies department will offer “The Body and Human Relationships: Divergent Meanings, Conflicting Values,” which will include discussion on the ethical implications of gay relationships.

Cestaro said the church’s position on homosexuality will be discussed in the religion course and as part of other classes. In his introductory course this semester, Cestaro said he plans to invite a chaplain to discuss religion and sexuality.

The Rev. James Halstead, chair of DePaul’s religious studies department, said he has no academic qualms about the minor, but said he’s had concerns about how it would affect DePaul’s image.

“For those who don’t know the inner workings of a university, study means study. Advocacy means advocacy. How does this play in circles outside the university, that is a concern,” Halstead said. “From the university’s point of view, this is a matter that ought to be studied in a multidisciplinary study.”

Students seem to agree. Cestaro, who is teaching the wide-ranging introductory course on Tuesday and Thursday mornings this semester, said demand exceeded the 30 spots in the class. He allowed a few additional students to enroll.

African American studies or Asian studies or any of the characteristics that people identify with,” she said. “It helps them to learn about themselves and the world they live in.”