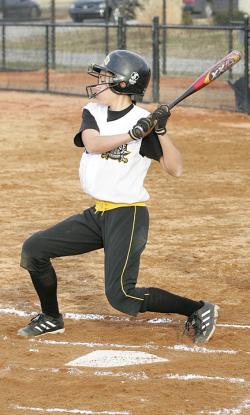 After a season in which the team ran off 55 consecutive wins (the most in college softball history) the Northern Kentucky University softball team is once again back into the swing of things.

The team must face the challenge of replacing NCAA Division II National Player of the Year Krystal Lewallen (transferred) and the school’s all-time leader in hits and runs scored Stephanie Leimbach (graduated).

But head coach Kathy Stewart believes the pieces are in place for this team to build on the success of last year.

“Each year, regardless of the players that are currently wearing a NKU Softball uniform, the expectation is to win. Each team, each year has an opportunity to build upon and surpass what previous teams have done. The bottom line is our players are expected to win,” said Stewart.

Stewart was quick to add, “The strength of this year’s team is the experience of our returning players.”

The team returns five starters from last seasons record setting run. Ricki Rothbauer, Becky Napier and Rachele Vogelpohl lead the team, giving new players valuable insight into what it takes to be successful, both through words and through on the field actions.

While winning 55 games in a row probably won’t happen anytime soon, hard work and practice will help bring success. Stewart believes dedication to the little things helps create the success for which the team constantly strives.

“In order for us to win the conference tournament and the regional tournament we need to do the little things right, execution in all facets of the game. Pitching, offense and defense are important,” Stewart said.

Last season the team went 16-0 in the Great Lakes Valley Conference (GLVC), winning the conference championship. Despite this, a poll of GLVC softball coaches ranked Southern Indiana at Edwardsville (SIUE) ahead of NKU (who came in at two). This speaks to the high level of competition within the GLVC, and the continual improvement needed to attain victory. In order to be successful in conference games, and all games, Stewart believes her players need to “leave it all on the field” outworking and hustling opponents.

In talking about the GLVC, Stewart said: “All of our conference games are tough, regardless of the records of the teams. Our biggest rivals are Bellarmine and SIUE.”

“Kara Lorenz has really started out well, so hopefully she’ll have a very good year. Also, we hope that our freshman (particularly the ones currently starting) will really come on for us,” Stewart said.

Being a member of the team goes beyond the field, dirt and gloves. It’s all about dedication, according to Stewart.

“The players work extremely hard, both academically and athletically, and take a lot of pride in representing NKU,” he said.

After sweeping it’s first home games of the season (beating Georgetown) the softball team has a record of 3-2.

The team will be traveling down to Huntsville, Ala. to face The University of West Florida.