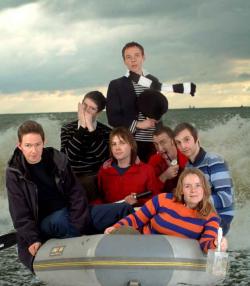 After their cult-classic debut album “Tigermilk,” Belle and Sebastian had a hard time living up to their own reputation. It wasn’t until 2003’s “Dear Catastrophe Waitress” that they reclaimed their “Beatles of Twee” status, and now their seventh full-length album “The Life Pursuit” proves that B’S is officially back on track.

Band leader Stuart Murdoch has always been excellent at creating story-telling lyrics that often make B’S songs the gems they are. However, in “Pursuit,” Murdoch finally perfected the craft of getting the musical brilliance to parallel the virtuosity of his words. The underlying piano melodies and horns are impeccable, as well as the vocals.

“Pursuit” is also one of the most jubilant LPs of late; the classification of “sad bastard music,” no longer seems to fit the Glaswegian septet. Perhaps it is the fact that they left Northern Scotland to record in Los Angeles, but something inspired an infectious, sunny vibe in band leader Murdoch that makes the listener wonder why this album was released in February.

In addition to being jaunty, “Pursuit” is one of the most eclectic albums to come out this year, yet it remains cohesive. All songs have the staple B’S sound, but each is derived from a different aspect of the 1970s popular music spectrum; think Bowie, Hall and Oates, T. Rex, and even some Shuggie Otis. Marrying such different tones on one album may be tricky for some, but B’S pull it off immaculately.

While better suited for a summer setting, “Pursuit’s” ability to remain unique while also expressing pop-sensibility and resurrection of trends makes it a must-listen for anyone.