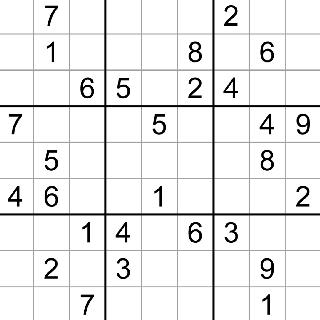 Here’s a puzzle with numbers. Nothing has to add up to anything else. Yippie! Instead, you solve the puzzle with reasoning and logic.

Where do you start solving a Sudoku puzzle? You can begin in any square, but one mistake early in the game and it’ll be a mess later.

In each row, fill in the numbers one through nine (1-9) in any order without repeating any number. In each column do the same. Using the given numbers, fill in each three-by-three box with the correct answer. No number should be repeated in any row, column, or three-by-three box.

An EASY puzzle (Neural Numbing May Occur) might take you half an hour the first time, but practice should lower your time. MEDIUM difficulty (Migraines Likely) will probably give you a headache.

On the other hand, if you were on death row, scheduled for execution in the morning, and the guard told you if you solved a HARD puzzle (Risk of Brain Aneurism) your life would be spared – you’d probably die.

Solutions, tips, and computer program at www.sudoku.com. You can visit this Web site to practice, learn strategies, or improve time.