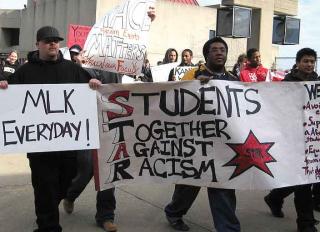 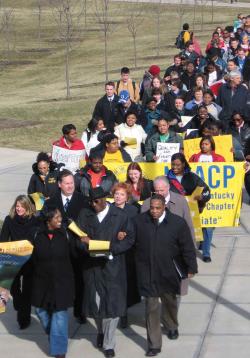 In a response to accusations of white supremacy, Northern Kentucky University administrators called a meeting with the students who protested during the Martin Luther King, Jr. march, which kicked off Black History Month on Feb. 3.

“When you call me a white supremacist, that gets my attention. That’s an evil, vile thing to say,” President James Votruba said.

Votruba, the Associate Provost for Student Success Dr. Dennis Weatherby and other members of the administration were present during the meeting.

Administrators called the meeting with the expectations of a dialogue, but once the students arrived, Weatherby said he felt as though students attempted to keep the administration from voicing its opinions.

“It was a very aggressive attempt. I think it’s outrageous,” he said. “I should never have to come to a meeting and check my dignity at the door. I felt like that’s what they were asking me to do.” Weatherby walked out of the meeting before it was over, telling students, “I didn’t come here for this. I want to have a dialogue and this is not it.”

The Associate Dean of African American Student Affairs, Cynthia Pinchback-Hines, said that the protest surprised her. She attended the meeting with administrators and students, but arrived 45 minutes after it started. Pinchback-Hines said that it was “difficult at times to be heard,” and that emotions were high. She also said she felt like there was “a disconnect between the actions and purpose” of the students.

Akosua Favors and Eric Smith, both members of the United Student Task Force (the group in charge of the protest), were present at the meeting and addressed Votruba and the administration. Favors told Votruba that the lack of any programs or celebration for Martin Luther King Day “was a big disappointment to us.” She also said that there is no respect for black males or multicultural students at NKU.

Votruba debated with students during the meeting, telling them that much progress has been made on campus toward diversity. “The problem is that the progress is taking too long,” Smith said.

Pinchback-Hines said speaking from her own experience, that she could see the movement and progress the university was making. “I think the university is aggressively addressing the issues of race on this campus,” she said.

At the meeting, Smith said, “We don’t feel like there is enough progress in African-American studies.”

“A faculty member who comes here to be a biologist, a chemist, or an accountant should have the freedom to define their relationship with other organizations as they see fit,” he said.

“This issue of the major has come up again and again,” Votruba said. “I thought the students today had softened a bit in understanding that there’s a process. Every curricular issue needs to be debated, because if we put resources into a program