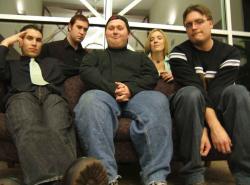 Anyone who makes road trips to Chicago knows that the Midwestern city is a capital for comedy troupes.

That isn’t the case here in Greater Cincinnati.

Aware that this city isn’t a comedy flourisher like Chi-Town – The Damn Handsome Men said they are looking to change the face of the local comedy scene. The five members – Richard Alcorn, Josh Flowers, Dan Cooper, Erin Schauer (the sole woman) and Scott Spaulding – have performed sketches for almost and a year and a half.

In order to express themselves collectively, the sketch comedy troupe sat down for a Q-and-A session to give readers the lowdown.

So, who went to Northern Kentucky University? Two of you graduated, and two of you quit, right?

Josh Flowers: Yeah, after like 130 hours I was like “I’m done.” Maybe I did graduate – I didn’t really check.

Richard Alcorn: Mine was much less than that. I was missing 7 a.m. classes because I was doing stand-up at night and not being able to make it in.

Erin Schauer: (Graduated with) radio and television with a minor in theater

Scott Spaulding: (Graduated with) computer science with a minor in math.

RA: I actually had the name for a long time