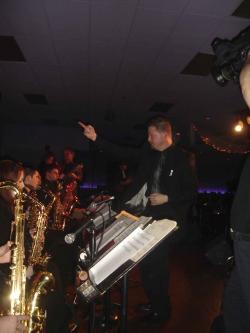 The streets of Newport, Ky., got a little bluer this past weekend.

The second annual Winter Blues Festival, presented by the Northern Kentucky University Department of Music, took place Feb. 3 at The Syndicate. Featuring performances from modern-day blues great Carl Weathersby, a handful of talented local blues musicians and the NKU Jazz Ensemble, the event proceeds went to a good cause.

Proceeds benefited the EMPOWER program, which works to raise and continue appreciation of American jazz. The program collaborates with the Campbell Lodge Boys’ Home to help some of the boys receive music lessons and instruments.

The Campbell Lodge Boys’ Home is a residential treatment facility founded in 1958 for boys ages 10-18. The group’s Executive Director Michael Schroth said that the show was a good experience for the boys. “A lot of the kids have never seen a saxophone before.”

The night of performances started with a set from Dick and the Roadmasters. The five-piece blues veterans were winners of the Cincinnati Blues Society’s Blues Challenge 2003.

G. Miles and the Hitmen was next on stage and played to a lively crowd of organization supporters and long-time fans. Greg Miles, lead guitarist and vocalist for the band, works closely with the home by playing basketball with the residents there on Tuesday nights. “This is a great cause,” Miles said during his performance. “It puts the music in their hands and the music in their hearts.”

The Hitmen was joined onstage by William Brian Hogg, saxophone player, Lecturer of Saxophone and Jazz Studies at NKU and head of the EMPOWER program. The NKU Jazz Ensemble performed later in the night. A spirited set filled with big band horns and bluesy guitar riffs got people out of their seats and onto the dance floor.

Hogg has also worked with the home. “We’re going wherever we need to go to bring the music back to the people, and it starts with these kids right here,” he said.

Carl Weathersby headlined the fund raising event. Born in Jackson, Miss., he had a childhood filled with the blues. He moved to East Chicago, Ind., at an early age, but spent his summers at home in Mississippi. Mastering his blues guitar technique, he later served as Albert King’s rhythm guitarist. “Once again we’ve gathered together for a good cause,” Weathersby said.

Walking offstage, Weathersby’s set literally took him to the people, through the crowd, and out the front door onto the street without missing a beat. Several other musicians, including Hogg, Miles and the NKU Jazz Ensemble, joined him onstage, making an impressive performance.

Robert Pederson, trombonist in the NKU Jazz Ensemble, called the performance “amazing.” It was an “unforgettable experience,” he said.

Weathersby’s enthusiasm shone during his set and brought a new life to the room. A member of the audience gave an impromptu harmonica performance during one of Weathersby’s songs.

“I looked forward to this,” Weathersby said. “It’s an honor to come down and perform with these folks.”