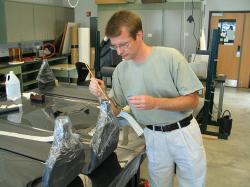 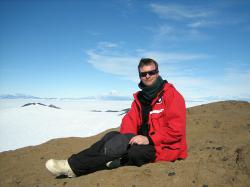 Nutter made seven predictions before he visited Antarctica. Most of them were dead-on. He did grow a beard, bring more cold weather gear than he needed and he never saw Peter Jackson when he stopped in New Zealand on the way home.

Nutter, an associate professor of physics at Northern Kentucky University, was part of a team that traveled to the bottom of the world in mid-December to launch a device which measured cosmic rays. The instrument was called CREAM, an acronym for Cosmic Ray Energetics and Mass.

“Cosmic ray is the worst name,” Nutter said. “Because people think it’s something out of science fiction.”

“Cosmic rays are interstellar travelers,” Nutter said. “People always want to travel to the stars and what’s so incredible about these rays is that it’s like the stars are coming to us.”

Nutter said that by studying these rays, astrophysicists can decipher what’s going on in the universe. The rays are elements that were accelerated to nearly the speed of light in a violent process like a supernova.

Stripped of the ray’s electrons, only the nuclei remain. The most common elements that make up these rays are hydrogen and helium.

Besides a lot of pictures, Nutter wasn’t able to bring back much from Antarctica. “No rocks or any other biological objects can be brought back (from Antarctica),” Nutter said. “They did have a small commissary there where I could buy things like T-shirts.”

“When I was there it was actually warmer than it was here,” Nutter said. “At that time there was a cold spell here and the temperature was in the teens. In Antarctica it was between 20 and 40 degrees.”

There was perpetual daylight during Nutter’s expedition since it was summer in Antarctica.

The balloon was launched at McMurdo Base. The base is a research destination for about 1,000 scientists of all varieties-from biologists to geologists.

Nutter said Antarctica was the perfect place for the launching because when the balloon was sent about 130,000 feet into the atmosphere (25 miles), it got caught in the polar vortex.

“The balloon goes around in a circle,” Nutter explained. “One revolution takes 10 to 15 days, and after that time you can choose if you want to take it back down yet. If it falls by accident nobody gets hurt because there’s nothing there.”

NASA funded the experiment and Nutter said scientists from 4 or 5 other universities participated. Nutter himself was responsible for constructing one part of the CREAM instrument.

In acknowledgment of Nutter’s contribution, an NKU logo was attached to the device and

the emblem of Norse pride reigned at the top of the atmosphere for 32 days during two revolutions around Antarctica.

“That was my first time in Antarctica,” Nutter said. “And I’m probably going to have the opportunity to go back in a couple years for the same type of experiment.”

During his trip Nutter maintained a blog at http://antartic-scott.blogspot.com. In it, he documented everything from the 32-hour flight to Antarctica to the goofy things New Zealanders say.