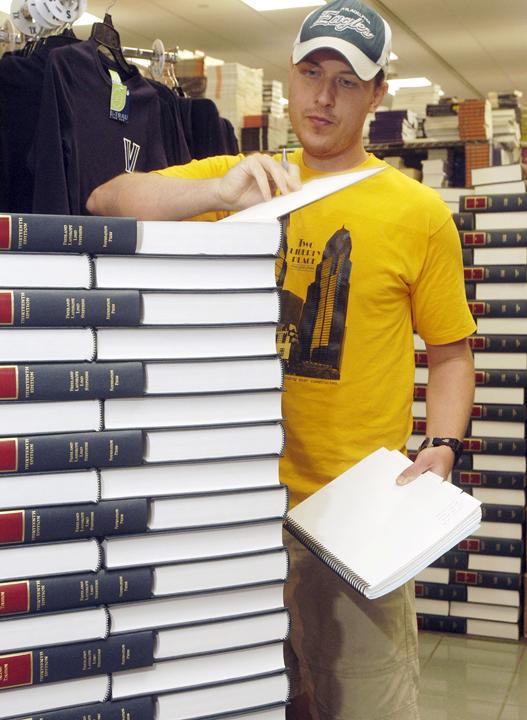 College textbooks have never been cheap. But last year, a crop of studies suggested that textbook prices are overly inflated, stoking the ire of students and consumer-advocate groups.

Don’t recall what you paid in the spring? Consider this:

The Government Accountability Office reported in July that textbook prices have increased at twice the rate of inflation over the last two decades. They account for 26 percent of tuition and fees at four-year public schools and 8 percent at four-year private institutions.

The Association of American Publishers is quick to point out that those percentages include both textbooks and supplies, such as accompanying compact discs or lab equipment.

But it is largely because of CD-ROMs that textbook costs have risen so much, at least in recent years, according to the GAO study. Furthermore, publishers regularly release new editions for introductory courses in which there is little content change, argued the State Public Interest Research Groups, a state-based public advocacy organization.

Although publishers argue that books can be offered separate of CD-ROMs, and new editions improve how material is presented, the bottom line is this: You can expect to spend between $600 and $900 per year on textbooks.

If you can’t afford that, here’s how to cut down your costs this semester.

– Swap books. You can find plenty of students on campus who want to buy your used textbooks or who want to sell theirs to you. And without the college bookstore taking its own cut on your used books, you could earn or save more with campus book swaps.

– Search for sellers/buyers on bulletin boards in department buildings during the first week of classes. Also, check listservs or online message boards that are organized by your school, dorm or clubs.

If you’re having trouble connecting with someone, go to www.campusbookswap.com, which organizes buyers and sellers by school (more than 100 campuses participate).

– Buy online. To find the best deals or the greatest number of buyers, go online.

New textbooks cost up to 30 percent less on the Internet than at college bookstores. Used books are 30 percent to 70 percent cheaper, according to Steve Loyola, president and founder of BestWebBuys.com, which compares book prices at 26 Web retailers.

Just make sure to leave enough time for shipping, which can take from three to seven days if the book is in stock, and consider any shipping fees and taxes. And to avoid ordering the wrong book, search by ISBN, a book’s identifying number, found on the copyright page or bar code.

If you’re not sure you’ll need a book, thoroughly read the return policy. When dealing with third-party vendors (say, another student), your only option generally is to resell the book.

Publishers often discount books for overseas markets in order to meet price demand there. Find these editions online, whether through Web sites abroad or searching traditional retailers (the book will be described as new or used international), and you could save an additional 30 percent, according to Loyola.

Beware, however, that international editions may vary in content or organization and will carry a different ISBN.

Talk with professors. Ask if you can select a cheaper version of the textbook.

“Low-cost editions, made with cheaper paper, black and white print or soft covers, are becoming a little more common,” said Hannah Nguyen, director of Make Textbooks Affordable, a campaign that students at the University of California at Irvine initiated two years ago.

– Other options. Ask if an older edition will suffice or if copies can be placed on reserve at the library. You may save money and get more work done by reading in the library.