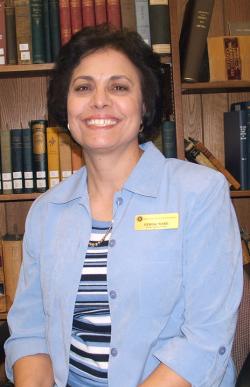 “There was never a night or a problem that could defeat sunrise or hope.”-Bern Williams

This quote can be found, among other places, at the close of every e-mail message Ferial Ware sends. Ware, for a number of reasons believes in the sentiment behind these words. When she came to the United States in 1976 as a college freshman from the war-torn Gaza Strip, which shares a border between feuding Israel and Egypt, she said she was so terrified, she didn’t think she would survive the plane trip.

Almost 30 years later, Ware is still helping homesick students and people who have left their homes for America cope in difficult times. Ware is one of 3,165 people living in Kentucky who speak Arabic, according to the 2000 Census. While more than 99 percent of the 1.37 million Palestinians who live on the Gaza Strip are Muslim, Ware and her family are part of the less than 1 percent Christian minority. She was raised Greek Orthodox, attended a Baptist church in Gaza and is now an active member of the Erlanger Baptist Church where she teaches Sunday school to second graders. For the last seven years, she has offered interpretation and translation services to the International Family Resources Center’s Language Bank in Cincinnati.

The increase in Arabic-speaking immigrants to America is due in part to the violence and fighting between Sudanese government and the rebel militia, according to news reports. Those people are coming to the United States with virtually nothing but the clothes on their backs, and finding help is very difficult. From her home, Ware translates Arabic documents into English, and vice versa, to help them find contacts for housing, employment and health care.

The driving force behind Ferial Ware is her strong sense of faith and courage “I see some of the children who have such a strong commitment and good understanding of their faith and spirituality, and some who are only at church because their parents drop them off,” she said. “I think it’s kind of sad they don’t understand how important spiritual growth is, and how helpful it can be.” It is Ware’s spirituality and faith that in a roundabout way brought her to the United States in 1976. She was working at a Baptist hospital in Gaza when she met an American doctor and his wife. The couple was working as American missionaries and Ware, who had been taught English in school, taught them Arabic. The doctor and his wife convinced Ware to go to school in the United States. So she earned a full 4 year scholarship to Corpus Christi State University in Texas, but could not afford the plane ticket. She worked in the hospital in Gaza, saving money until she could depart. “I am really proud of myself,” Ware said with a smile. “I bought my plane ticket, I came to the United States and I went to college. I didn’t have to ask my family for any money.”

Life in America was not easy at first for Ware. She didn’t return to see her family the entire time she was in school; they kept in touch by telephone calls and letters. She went to a classmate’s home during her first weekend at school. She recalls other girls coming to her dorm and crying on her shoulder. She says she thinks they felt close to her and that she could relate, because she was the furthest from her home. In her college classes, she was surprised to find out that how people spoke English was not how she was taught. “I expected every word they said to be in the dictionary, and it wasn’t,” she said. “People would shorten words and it seemed sometimes like they would make words up. It was very confusing for me.”

Viki Kimball, Director of International Student Affairs at NKU, describes Ware as a “friendly, supportive person who knows how to really help a student adjust to this area. She never appears patronizing or all-knowing.” Kimball has worked with Ware on many projects for the department of International Student Affairs. “She does not dismiss anyone when she thinks they no longer need her help.”

Ware says she tries to give back as much of herself as she can. “I helped deliver a washer and dryer to a family who came to this country as refugees with their five children,” she said. “The gratitude and appreciation they showed when we arrived at the door was incredible. We think nothing of being able to walk down the aisle at the grocery store and have hundreds of cereals to choose from.”

Betty Weber-Reinke, a library assistant at NKU Chase College of Law Library, works closely with Ware and says she is special and courageous. “She’s one of our best citizens,” Weber-Reinke said. “When she became a citizen, it meant so much to her. When we are born in this country, we become very complacent about being a citizen. The things we take for granted mean much more to her, because she could not have had the life she has now had she stayed in Gaza.”

True to form, Ware answers probing questions about her personal life with grace. She lost her father at 18, right before she moved to this country. She met her husband in New Orleans where she was studying religious education. They were married in 1981 and had a daughter, Georgena in 1983. The family moved to Erlanger in 1989. Her husband, a Louisville native, died of a rare type of anemia in 1994, leaving Ware with a young daughter to raise. Although Ware said some people might see this as a reason to give up, she says she saw her husband’s death as a reason to keep going. “His faith was incredible to me,” she said. “Even when he was weak with very low blood count, he would reassure me by saying ‘Don’t worry, it will be better tomorrow.'”

Picking a miniscule piece of lint off of her crisp black suit, she takes a deep breath. Her warm face doesn’t fall as she talks about her personal tragedies; it almost lights up. Her sense of duty is admirable and unshakable. “I cannot stop what I am doing,” she said. “I have a responsibility. People in the United States have been so nice to me. I have to give back to them.” Erlanger Baptist Church held a bone marrow drive for her late husband, which connected a little girl from Austria, Europe who needed bone marrow to a donor in Erlanger, Kentucky, USA. “I have a lot to be thankful for,” she said. “I am not angry about my sad experiences; they have been tests of my faith. My husband’s death helped someone else find life.” Last year, her mother died.

Ware thinks about her homeland, but will not move back. She says she believes Gaza will one day find peace, although it is a long way away. “I cannot remember a time of peace, but one day it will happen,” she said with confidence. She does not blame the Palestinians or the Israelis, but instead she blames the fear she thinks grows in everyone. “I feel sorry for them, and anyone who feels it necessary to fight because they are afraid. I wish they could understand it doesn’t have to be that way.”