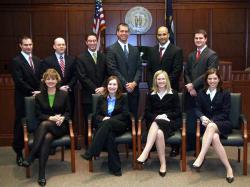 Last month, students from Chase College of Law argued before judges in favor of a man framed and injured by a police officer. An hour later, the students reversed their stance, claiming no compensation should be given. This was all a part of both Kentucky and Ohio’s Mock Trial Competitions.

The student’s persuasive arguments garnered wins in both the Ohio and Kentucky Mock Trial competitions, held Nov. 10-12 in Cleveland and Lexington, KY. This is the first time in Chase’s seven years of participation that they walked away with top prize in both.

The Chase students who competed were second and third year law students, coached by their faculty advisor Kathleen Hughes.

Hughes said the teams had to argue both sides. “Each trial lasts three hours,” she said. “Then the teams take a break and come back to argue the opposing side.”

The case argued in Kentucky involved a wealthy Texas rancher who claimed some expensive jewelry was stolen from him. The insurance company disputed it as a fraudulent claim. The team argued first in favor of the rancher, winning that trial and then coming back an hour later to prosecute him.

The competition was judged by practicing attorneys and judges who evaluated, among other factors, each team’s strategy, presentation, evidence and use of direct and cross examinations.

“(Competition) is amazingly exhilarating,” said Dawn Sommers, member of the Chase team that won in Cleveland. “My favorite part is when the other side is lying and you can stand up and nail them on cross examination with two questions.”

“It was a very thrilling round,” Sarah Clay said about when she helped confront an undefeated University of Kentucky team in the semifinals. “Actually, high drama. One judge for that round later told us in front of everyone that we ‘bushwhacked’ the other team.”

“When we heard about the Kentucky team winning we were outside the main courthouse in Cleveland yelling and screaming,” Sommers said. “We hadn’t found out our results yet, but when we heard, it didn’t even matter how we did because we were so excited for them. I would guess that (the Kentucky teams) were just as happy for us when they heard about our victories.”

The preparation was intense on the part of students and coaches, Sommers said. “We practiced two nights per week that averaged about four hours each session,” she said. “Saturday mornings (we spent) scrimmaging, which took anywhere from four hours to nine hours.”

According to Clay, it was crucial to win. “There is a lot of pressure to succeed in these competitions,” Clay said, “for our coaches…for our school, because bragging rights and Chase’s reputation are so important.”

In the Kentucky competition, team members Clay, Steve Dasenbrock, Brandi Hagan and Taylor Sorrels defeated a team from the University of Kentucky in the finals. Another team composed of Lewis Diaz, Adam Hill, Scott Van Nice and Wes Williams advanced to the semifinals by defeating a University of Louisville team.