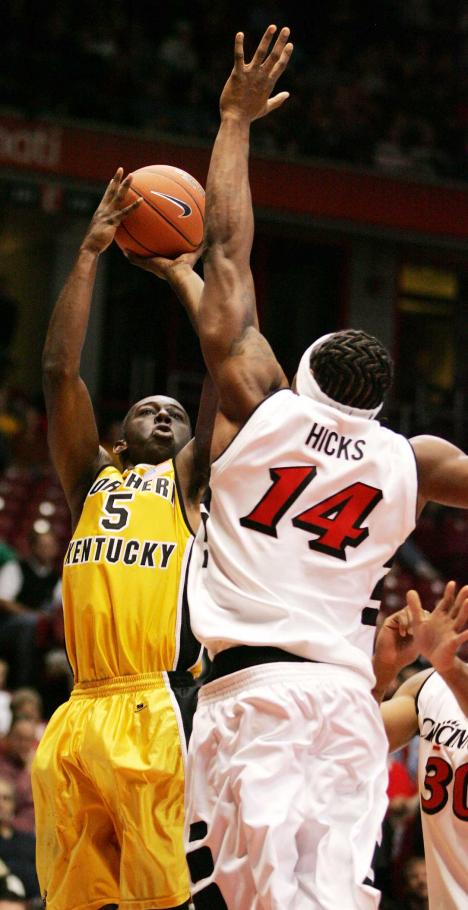 James White poured in 19 points including several emphatic dunks to excite the crowd as the Cincinnati Bearcats scratched and clawed their way to a 96-60 exhibition victory over the Norse at Fifth Third Arena Saturday night.

The Norse were led by Gavin Ludgood’s 14 points and Kevin Reinhardt’s 13 points and eight rebounds. Travis Rasso and Mark Hawkins chipped in eight points each in the losing effort.

The Bearcats opened the game with the James White show. White hit two three pointers and threw down an electric dunk to excite the crowd scoring UC’s first eight points. NKU answered that with two offensive rebound stick backs by Ludgood. NKU trailed by ten with 11:13 left in the first half when White got into the act again. As a follow up to his first dunk, White threw down a Sportscenter top ten alley oop from Jihad Muhammad. The Bearcats opened the game up a bit just before halftime allowing them to go into the break up 43-27.

The second half began with NKU hitting four free throws. UC answered that with a free throw and another field goal. The referees took control of the game from there. Both teams were called for numerous fouls that led to the crowd of 6,937 to grow a little restless. There were 39 fouls on both teams in the game. NKU outscored the Bearcats from the stripe 21-14.

Midway through the second half, things started to take a turn for the worse for the Norse. UC opened the game wide open with a 21-5 scoring run. Before that NKU was hanging around down by twenty. NKU’s last field goal came at the 6:37 mark in the second half. The Norse could not make the push to get the game closer and it eventually led to their demise.

The Bearcats used a tough physical trapping defense at half court to create turnovers. NKU committed 15 turnovers that led to 26 points for UC. UC also used its size and athleticism to dominate the paint and beat NKU in transition. The loss drops NKU to 0-8 all time against the Bearcats. UC enters its first season in the tough Big East conference with a new head coach. Andy Kennedy takes over for Bob Huggins after he was relieved of his duties, a very unpopular move among UC fans.

NKU moves back across the river after competing against tough Division I opponents Xavier and UC. The Norse open their season November 18th against Findlay.