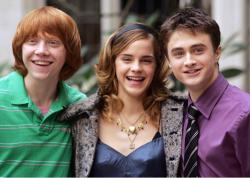 Weak-kneed muggles may recoil from “Harry Potter and the Goblet of Fire.”

Dubbed “Scary Potter” in the British press, the latest screen adaptation of J.K. Rowling’s increasingly dark books is the first in the franchise to be slapped with a PG-13 rating.

Opening Friday, “Goblet” overflows with menacing monsters and scenes of torture and murder. Based on the fourth book in Rowling’s projected seven-part series, it follows 14-year-old Harry through a harrowing magical Olympics called the Triwizard Tournament. It culminates with the chilling regeneration of evil wizard Voldemort in a graveyard ritual of flesh-and-blood sacrifice.

It’s hard stuff to stomach, especially when rendered with great special effects. But experts say the boy wizard’s terrifying trials, and how he copes with them, reflect very real stages of human development and offer audiences strong tools for dealing with fear.

The Potter series emphasizes “the notion that you have to act even if you are afraid,” said Anne Alton, Ph.D., an English professor at Central Michigan University, who specializes in children’s literature.

“That is a very mature thing, and I don’t mean an adult one because kids do it all the time,” she said. Harry Potter “does the task at hand because he understands that there are things more important than fear, like annihilation, non-existence, life without joy.”

Faced with such threats throughout the series, Harry picks his way along a treacherous path of discovery. However fearful he may be, recognizing this process is central to adolescence.

“At this stage of development, you are trying to distinguish between good and evil,” said Lynne Tan, M.D., a psychiatrist at Montefiore Medical Center. “When you’re a little kid, you don’t really know the difference between the two. As you get older, you learn what is acceptable in society, and it is very complex thinking.”

Especially for a young hero who, as he defends himself against the Dark Arts, realizes his own potential to use them.

“There is the suggestion that within all of us there is the potential for good and the potential for evil,” said Lana A. Whited, an English professor at Ferrum College and editor of “The Ivory Tower and Harry Potter: Perspectives on a Literary Phenomenon.” “That we could possess this possibility and can choose evil is very troubling. Harry has an ongoing anxiety about it.”

Earlier in the series, Harry’s mentor, Professor Dumbledore stresses that it is our choices, and not abilities, that determine who we become.

Significantly, Voldemort fears his own destruction above all else. Later books reveal the horrifying lengths he has gone to achieve immortality. In contrast, Harry risks his life again and again to battle evil and to save those he cares for, he nearly drowns saving others in the Triwizard Tasks.

Rowling emphasizes the importance of consequence with the introduction of “The Unforgivable Curses” in “Goblet.” The use of these three spells, which kill, inflict pain and exercise total power over others, can land a wizard or witch in prison for life. Dark wizards use them with abandon, to terrorize, manipulate and control with fear.

“Those curses are meant to make us think about which of our actions is irrevocable,” Whited said. “The suggestion is that the greater harm is the harm that cannot be undone.”

Though Harry struggles with more and more frightening circumstances, fans need not shy away from the books.

“One of the things that helps us cope with our own fears is to feel through a vicarious situation,” said Dr. Linda Sapadin, psychologist and author of “Master Your Fears; How to Triumph Over Your Worries and Get On With Your Life.”

“You get involved in a drama (like Harry) and get an adrenaline rush out of the fear, but it is safe. You know that in the end, everything will work out OK.”