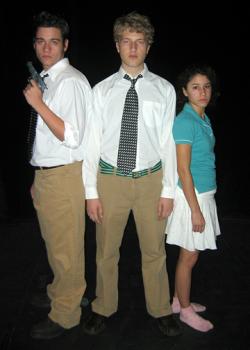 This year’s freshman crop of theater students will show off their talents and skills Nov. 18 and 19 at 8 p.m. in the Black Box Theater with the annual First-Year Student Show, “Spring’s Awakening.”

“This year’s class is very talented,” she said, “They are triple threats (performers who are skilled in acting, singing and dancing).”

The play, translated from Frank Wedekind’s German text, is more than 100 years old, but it’s still edgy and controversial, Teyke said. The production modernizes the piece by staging it as a reality show, complete with commercials and an American Idol. The parents and teachers, with all their rules and morality, square off against the sexual bombardment of the media while the kids are left in-between the two, trying to balance their influences with their hormones.

“(The show) is very young and hip,” Teyke said. “It will really speak to the students. It’s issues that they have all dealt with or are dealing with.”

Designed to be an apprentice show to introduce freshman to the college theater atmosphere, the First-Year play serves as both a stepping-stone to the regular season productions and as a way to bring the class together and showcase new talents.

“The show lets a lot of people come together with unique qualities to bring to the table,” said Jessica Kaiser, a first-year transfer student who performs as the American Idol. “I’ve met so many people that I otherwise would never have known as a freshman in such a huge building.”

Producing the show proved to be a challenge for Teyke. With 52 freshman performers in the limited space of the Black Box Theater, it was an overwhelming task.