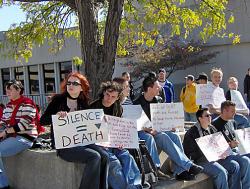 With signs held aloft and a determination to get their message out, Northern Kentucky University students held a “sit-in” on the university’s campus from 9 a.m. to 4 p.m. last Wednesday. According to NKU senior Alex Kindell, they were protesting against the hate chalkings that appeared on campus after the Fall Break holiday; the chalkings that criticized the original ones drawn by students during Coming Out Day.

“(The hate chalkings) were in such obvious locations that anybody walking on campus had to see something,” Kindell said.

NKU senior Christina Martinez looked at the flip side.

“I think the chalking both for Coming Out Day and against (it) created dialogue on campus … that’s very important to continue,” she said.

However, Kindell and other students looked at the hate chalkings from a different angle.

“People speaking out in such a hateful way isn’t just a gay issue or a straight issue … it’s a human issue,” Kindell said. “So I wanted all of the students to be able to come together and say, ‘we are not going to stand for this on our campus … we are not going to let this pass.'”

The students participating in the sit-in held various signs that said, “What do you stand for?” and “Hate words develop into hate crimes.” Most of them camped in front of the University Center, but students also protested near Founders Hall and various parts of campus, Kindell said.

Sophomore Andrew Schultz, who also hung around the University Center that day, didn’t agree with the protest.

“There’s no point to protest, I don’t think … people are just going to knock you even more,” he said.

“It doesn’t bother me,” he said. “There’s freedom of speech. They can do what they want.”

Against the protest or not, non-participating students and university officials didn’t stop the protest.

“I personally was expecting for some sort of harassment. I wasn’t really expecting us to be allowed to stay on campus that long,” she said. “It was really the first time I’ve ever seen a group of students come together without an organization and really without campus permission….”

“We had gay people there, straight people there, men and women, black and white. It affected everyone,” she added. “It’s a human issue, and everyone stood together, which was the most incredible thing.”