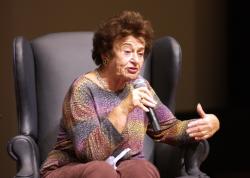 The 81-year-old author and humanitarian received two standing ovations by her attentive and occasionally tearful listeners. Klein is author of “All but My Life,” featured this year by Northern Kentucky University’s Book Connection. She has also received an Oscar for the HBO film “One Survivor Remembers” which is based on her book. Oprah has named Klein among her 10 favorite interviewees.

Nancy Kersell, from the department of literature and language, introduced Klein. She discussed the way she has seen Klein personally touch people’s lives. Kersell said she sent Klein copies of essays students have written for her on “All but My Life.”

“On several occasions, Gerda has said, ‘Give me the student’s home number so I can thank her personally,'” Kersell related.

Kersell said the thoughtfulness of an author personally responding to essays that students wrote on her work would not surprise Klein’s family who knows how generous she is with her time. “On one occasion, (Klein) spent half an hour exchanging muffin recipes with someone who called the wrong number,” Kersell said to an amused audience.

At the beginning of her talk Klein warmly thanked the large audience for coming. “In my years of slavery,” she said. “We always asked each other, ‘Would anyone ever want to know? Would anyone ever care?’ Your presence here today has answered those questions eloquently.”

Klein remembers the exact moment Nazi troops entered her town that was near the border of Poland: Sept. 3, 1939 at 9:10. She compared their coming to the devastating tsunami that swept over Asia in December.

“That day, a wave of hate swept over us – my parents, only brother, home and childhood were forever taken away in that moment,” Klein said. “The world came forward after the tsunami. In our case, there was nobody.”

She was put in a concentration camp for three years. She was sold on the slave market for the equivalent of $3.50 and worked in a German factory.

Klein said although the atrocities connected with the Holocaust are all true, those experiences were not what she wanted to talk about with the audience. Instead, she said she wanted to focus on what humanity existed and gave hope during such a devastating time.

She related the story of the time her friend found a single raspberry in the gutter. She carried it in her pocket all day so that she could present it to Klein that night. Klein asked the audience to imagine a situation so desperate that a raspberry became someone’s most valuable, and only, possession. This friend died in Klein’s arms at the age of 18, only a week before American troops came to liberate them.

Klein said it is impossible for us to truly appreciate freedom if it has not been taken from us, but she described it as well as she could. “If you are in a black box,” she said, “struggling for every breath, and suddenly that box is open and sunlight surrounds you; that is what freedom is like.”

When she was liberated, Klein weighed 68 pounds, her hair was white and she had not taken a bath in three years. It was the day before her 21st birthday. Klein recalled standing in the door of the factory watching a handsome American soldier run towards her.

“He asked an incredible question,” Klein said. “He asked if he could see the other ladies.” The polite address was foreign to her. That, and the gesture he made of holding open the factory door for her, restored her to humanity.

She married that same soldier, Kurt Klein, only a year later in Paris and came to the United States with him in 1946. She said she loves America and has only returned to her original homeland one time. It was for a few hours to visit her parents’ grave at Auschwitz.

Now through her humanitarian work, and the establishment of the Gerda and Kurt Klein Foundation, she continues to reach out to those who are needy. She asked the audience to remember the countless millions around the world who go to bed hungry every night.

Klein told the audience, “Each and every one of you can do a great deal. This is not a time of entitlement. You have no idea of what you have because, thank God, it has never been taken from you.”

Klein signed book autographs before and after the speech.

“I’ve waited seven years to meet Gerda,” Alice Akin said as she waited in line. The local teacher is one of a few former NKU students whom Gerda personally called to thank for the essays they wrote on her book. Akin said she wanted to ask Klein if she was planning to abridge her book for younger readers.

“I’m just incredibly moved and overcome right now,” Akin said on her reaction to Klein’s speech. “It’s a message everyone needs to hear.”