Decisions, judgements ‘all fall on God’ 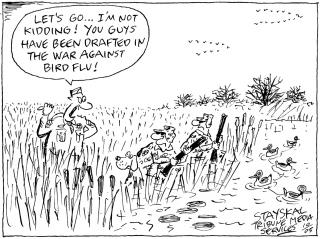 Jay Vinson, I followed with enthusiasm the course of your reply to the recent happenings regarding homosexuality and God.

You stated some passages from the Bible and references that you are not judging individuals based on their sexual preference; however you still judged. You among many others can go around and spout off biblical references on God’s ideology, but the most important thing of all that many forget to mention is that God wants us to love one another. I will not bore you with biblical references like you did me in your meager statement; however judging by your proclamation I was completely appalled. Remember always, “He who does not sin, cast the first stone.” Do you honestly speak for God? Does anyone speak for God at all? The answers to these questions are a simple “no” and that’s it.

I’m heterosexual; however I am a sinner like everyone else in this world. Now, I cannot say that the homosexual lifestyle is a life of sin. It is a preference of choice and God gave us the gift of freewill to make those choices without his influence. Did you ever think in a philosophical manner that quite possibly God changes like all of us? I mean we were made in his image, were we not? Then there could be a possibility that his perspectives on things change like the rest of us.

Did you also ever stop to think that the Holy Bible has constantly changed over the past few thousand years and that the book was written by mortals?

It is a fact that human opinion somehow distorts the facts at hand and that things can either be falsified or misinterpreted. I believe that the decision and judgments all fall on God, and he will judge what sin is and what it is not. You and many other individuals talk of Christ and his teachings, yet many of you never will follow them to the exact definition. Why? Because it conflicts with what your heart believes in.

Now for the use of slurs that were targeted against the homosexual community on campus: Well that was completely inappropriate as well as ignorant. I would like to see these cowardly fools actually make an attempt to have a reasonable debate in front of their peers without the use of such blatant disregard for words. We all have to remember that homosexual society has had heterosexuality shoved down its throat for many generations and it will unfortunately continue to be that way. To just have one day dedicated to their cause is not a big deal in my opinion and in fact I honor it. They are no different than us except for the fact that we are all different when it comes to choice and preference. How do you all expect for society to progress when you cause it to digress by foolish opinions backed up by words of hatred?