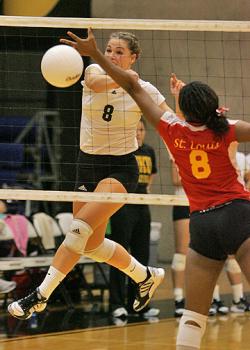 Dye recorded 13 kills and a .318 hitting percentage as NKU remained perfect (17-0) in the all-time series against Missouri-St. Louis. The Riverwomen dropped to 5-18 overall, 5-7 in the GLVC.

The winner of the GLVC Tournament, which will be played on the campus of the No. 1 seed Nov. 10-12, receives an automatic berth to the NCAA Division II Tournament.

Holmes slammed down 15 kills and finished with a .619 hitting percentage as NKU defeated Quincy, 30-18, 30-18, 30-17, in Regents Hall. The sophomore middle hitter converted the 15 kills in 21 attempts with just two errors, and many of her attacks were rocket-like shots that hit the court before Quincy’s defense could react.

Holmes and Tristen Dye combined for 22 kills during the first two games, and NKU coasted past Quincy (4-16 overall, 2-11 GLVC) for the victory.

NKU is tied for eighth place in the latest NCAA II Great Lakes Region poll. Southern Indiana and Northern Michigan are tied with NKU for the eighth spot in the poll.

The Norse hit the road next weekend for GLVC matches at Saint Joseph’s (Friday) and Indianapolis (Saturday).