Cities unite for Walk As One 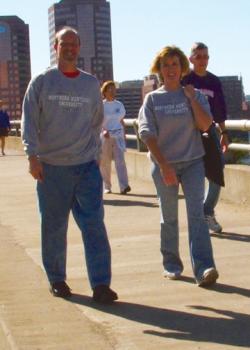 Close to 3,000 people gathered along the riverfront area on Saturday. October 15, just in the shadow of the Suspension Bridge. There weren’t fireworks. It wasn’t for a cultural food festival. It was, instead, for the annual National Conference for Community and Justice’s Walk As One event.

The event, which was designed to raise benefit money for NCCJ and the National Underground Railroad Freedom Center, is an annual gathering of people of all races, creeds and religions around the city. The walk itself, which was 10k (6.2 miles), began at the Freedom Center, went through downtown Cincinnati, across the purple bridge over into Newport, through Newport and Covington, and back across the suspension bridge to end at the Freedom Center. There was also a run, which started ten minutes prior to the walk start time of 10 a.m., which followed the same route.

“It went very well,” said Mimi Assanuvat, Senior Executive Secretary to the President of the University. “Northern had good representation at the event.” She, along with 13 other NKU representatives, mainly faculty and their families, took part in the walk, which the university was heavily involved in on several levels.

NKU President James Votruba served as educational chair for the event. “NCCJ sponsors programs designed to build understanding across lines of race, ethnicity, religion, national origin and class,” he said. Votruba, along with Jack Cassidy of Cincinnati Bell, also co-chaired the event. NKU also printed several of the fliers that the walk used in the campus print shop.

Several different companies were represented among the 3,000. Among them were GE, Channel 9-WCPO, Mercy Health Partners, Cinergy, Cincinnati Bell, the Cincinnati Police Department, and the Enquirer. The groups gathered at 9 a.m. outside the front of the Freedom Center for free food, drinks and fellowship, allowing them to tour booths set up by the various groups to see what they were all about. At 9:35 a.m., a group from Mercy Health Partners hosted an aerobics workout on the grass in front of the building, to warm everyone up and get them ready. At 9:50, the runners began, and the walkers followed 10 minutes later. According to Assanuvat, the walk took about 90 minutes to complete. Many groups mingled, talking and chatting with each other while they walked.

Prince Brown, Jr., a professor of sociology, philosophy and anthropology at the university, was also heavily involved in both the walk and the Freedom Center. He said, “This walk is a community external expression that expresses commitment to an inclusive society and a desire for racial reconciliation.” Brown has been involved with the walk for three years, and with the Freedom Center since its debut five years ago. Brown said he felt the walk was an important event because race is a subject a lot of people are still not comfortable talking about. In addition to his duties with the university, Brown is also involved with the Institute for Freedom Studies. He takes part in yearly joint conferences with the Freedom Center. He is also frequently present at seminars and workshops on slavery and the Underground Railroad.

The money from the walk goes to support programs that NCCJ is involved with, such as Anytown Youth Leadership, the Police Youth “Live-In” Camp and Healing Through History. NCCJ Chairman Nathan Stein said, “I think the event was a great success this year. Of course, you put so much time and energy into the event and you always worry how it’s going to turn out, and if everyone will enjoy it.” Brown also shared his feelings on the event, “I commend the people who thought up the idea and are still working to make it an even more high-profile event.”