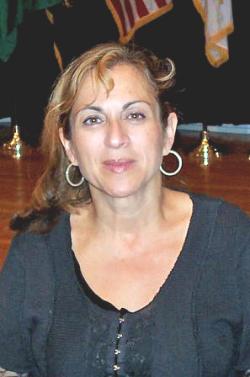 In celebration of Hispanic Heritage Month, Christina Garcia was Keynote Speaker for a presentation which occured on Oct. 7 in Greaves Concert Hall. The speech focused on what she called “living on the hyphen.” Garcia said that living on a hyphen means that you live with two cultures and by doing so, understand both cultures better.

“I began to study my own history when I began to write.” Garcia said, “I went from a New Yorker to a Cuban-New Yorker living in California my own personal hyphen. Garcia shared with the crowd her experiences through her life.

Garcia was born in Cuba and moved to New York City when she was two. She attended private schools through high school and graduated from Columbia University. Garcia said that when she gives speeches or lectures, the hub tends to gravitate to the political realm. She said, “There is so much information about Cuban politics out there…No matter what corner of the country I go to I can always find an intense interest about the island.”

She also discussed how Cubans, both on and off the island, feel a sort of exile from their home. “For many Cubans, there is a rift between ‘here’ and ‘there’.”

Garcia said that in areas like Miami, where the Cuban community is very active, people assume you have a certain view of the political situation. “If you don’t fit their mold, you are alienated from that group. It is so politically charged,” Garcia said. “To not go along is to invite a public retaliation. There’s a kind of censorship going on in the community, a censorship of public discourse.”

While she was a political journalist for Time magazine she had an opportunity to spend some time in Miami. When she expressed her views in the Miami community, she was cast out. “I grew up having a one dimensional picture of the people in Cuba. But there’s another side. The truth lies somewhere in between. The political world is so black and white that the grays get lost in the shouting match between the right and left,” Garcia said.

Garcia said the media in Cuba is one-sided as well. “The official press is basically a mouthpiece for the government,” Garcia said. “So, if you want to know what the government thinks or what their agenda is you can rely on the papers. The press is very restricted and that’s a huge problem for the people of Cuba.”

“But, if you want the other side, you have to find another way to get your news. Some people get it from the internet if they are fortunate enough to have it, others have CSPAN but some people can only get the news from family in outside countries or from listening to tourists. But these people are very interested in the news.” Garcia said. “Their lives are literally at stake.”

The Latino Student affairs office has been hosting the National Hispanic Heritage month since Sept. 15. Leo Calderon, coordinator of Latino Student Affairs, said that keynote speaker is one of the biggest parts of the celebration. Calderon said that Garcia is interesting because she has a different perspective, because she grew up in New York in a non-Cuban community. Calderon said, “We asked Christina Garcia to speak because she is a tremendous speaker, she is respected and she enjoys talking to this kind of audience. She did a great job.”

President James Votruba said, “One of our challenges as a campus is to continually internationalize not only our goals but our perspectives.” “Garcia does a wonderful job weaving her personal experience and literary experience with her political views. It is a perspective that many people aren’t familiar with.”

Joe Szydlowski, an NKU student who attended the speech, said, “You always hear about how terrible people have it in Cuba. I think it s interesting to hear that some people are happy there and some people still support the revolution. Her angle is one that we don’t usually get to see.

Garcia s novels, “Monkey Hunting,” “The Aguero Sisters,” and National Book Award winning “Dreaming in Cuban” are Garcia’s way of sorting out her own feelings while making a statement to the world.

“A lot of people ask me which character I can most relate to. I say all of them,” Garcia said. “There is a piece of me that relate to all the people in my stories. I can understand how all of them feel. Garcia said that writing is her way of saying, “There are a lot of us out here and we don t all feel the same.”