In the hot seat 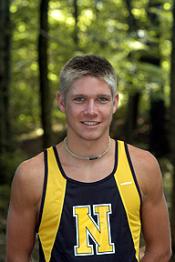 Tim: How good was your senior year at Clermont-Northeast? Allen: It was OK. In the league meet I finished in sixth place, I was first team all-conference and the day before the district meet I came down with an illness, which ended my season.

Tim: Why did you choose NKU? Allen: I received an academic scholarship here and also at Xavier and UC-Clermont.

Tim: Why didn’t you go to Xavier? Allen: I thought I would do better with a Division ll school like NKU. I wanted to play sports somewhere. My times were not that fast for a Division l school, and they recruit a lot of all-state runners and I wasn’t one of them.

Tim: What other sports did you play? Allen: Hockey and wrestling.

Tim: Well, I’m sure you would be one of the first to sign up if we get a hockey team. Allen: [Chuckle]

Tim: What is a typical off season like for you? Allen: I run six days a week, 6-10 miles a day. I try to run one race a month, and in my spare time I like to swim and ride the bicycle. Of course, it helps when you are working as a lifeguard during the summer.

Tim: What race at NKU stands out in your mind the most? Allen: Last year at the Lake Front Invitational in Chicago, Ill. Everyone was bunched together at the start and runners had to run in the sand. Some time is spent dodging the metal camper grills in the middle of the course. Once, during the spirit of the competition, some guy cut me off so I tripped him.

Tim: What kind of training facility would best serve the Cross Country teams needs here at NKU? Allen: We could use a 440 track for our speed workouts and for our distance training it would be nice to have an A.J. Park next to us.

Tim: Is there ever anytime one of your races would be cancelled or delayed? Allen: Only during a lightening storm.

Tim: What’s a typical practice like? Allen: We stretch for 15 minutes, and then we warm up by running a couple of miles. Then we run a couple more miles around the campus loop or A.J. Park, and then we top it off with a three quarter speed tempo run of a few more miles. We cool down with a one-mile run and then stretch, which totals 8 to 10 miles every practice.

Tim: What is this season going to be like? Allen: We will be good because we got a decent bunch of incoming freshman and they will add to the mix. Since I have been here, our newcomers have been better and better each year. These things take time.