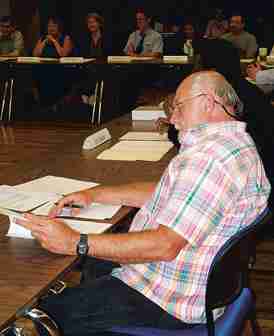 Northern Kentucky University’s Faculty Senate voted 18-10 to adopt a plus/minus grading system at its meeting Sept. 19. Bill Oliver, Faculty Senate president, said it is not yet established when the system will go into effect.

The plus or minus adds or subtracts, respectively, one-third of a quality point to a grade.

Before the vote, the senate voiced opinions and concerns of the departments on campus as well as individual problems with the plus/minus grading system.

Ed Brewer, vice-president of the Faculty Senate and a faculty member from Chase Law school, said the school has been using the system for almost eight years and finds it “to be wonderful.”

While Brewer is in favor of the system, other professors were not passionate about the change.

Summers argued that with the new system, average would no longer be a C-student.

“A ‘C’ is suppose to be average, whether it’s a C minus or C plus,” she said. “With this scale, average is not good enough.”

Certain departments on campus require students to maintain a 2.0 average in order to graduate. Summers was concerned for students who, under the new system, will receive a C minus and be awarded a 1.667 instead of a 2.0 for a C.

“The B students seem to benefit from this. The others seem to be harmed by it; that’s problematic,” Summers said.

While Summers voiced opinions against the grade change, other senate members voiced their want for the change.

Kevin Kirby, of the department of computer science, said, “by adopting this policy, we’re trying to get the highest resolution possible” and it would be the most accurate representation of a student’s grade.

Brewer also argued that the system would provide accuracy.

“It gives more specific and accurate information about how students are doing,” Brewer said. “People who care about what they’re getting are going to care about that extra one-third of a grade point.”

Physics and geology Professor John Filaseta voiced heavily against the accuracy argument. He related the situation to advice he gives his students. He said in physics, he tells his students just because it is a precise measurement, doesn’t mean it is an accurate one. With a science course, unless a scale is developed by the professors, Filaseta said there will be a “fuzzy area for student grades.” Whether a student will qualify for a B or B plus will have to be justifiable.

Ban Mittal of management and marketing said he feels with the new grading system, he will spend more time defending to a student why they receive a B minus rather than a B.

“With the new system, I would move toward more objective tests (instead of) essays,” he said.

The Professional Concerns Committee first proposed the grading system change in the spring 2005 semester. After amendments to the proposal, it was tabled until the September meeting. Oliver said in the meeting that the committee first proposed the plus/minus system to distinguish between students who make an 89 percent and an 80 percent in a class.