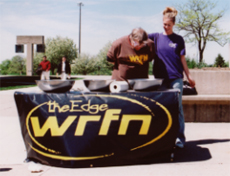 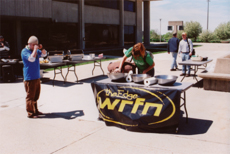 When are red beans and rice not for eating? When you have to dig around in it to find a poker chip. Northern Kentucky University radio station, WRFN, along with Fat Fish Blue sponsored a prize dive April 25 from noon to 2 p.m. on the UC plaza.

Contestants, using only their mouths, had to find a poker chip buried in a bowl of spicy red beans and rice from Fat Fish Blue.

Some of the participants decided it was better to use one of the DJs from WRFN, namely Gary “The Legend” Pollard, promotions director and sales manager, to find the poker chips. He along with the manager of Fat Fish Blue had the honor of having their faces buried in the beans and rice.

WRFN would like to thank Fat Fish Blue for their support in this event.

Many beans were swallowed, many prizes were given away and many paper towels were used, but when the event was finished, everyone had fun.