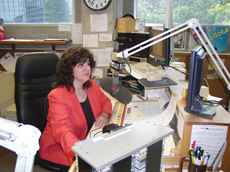 For someone celebrating 20 years of broadcast history Maryanne Zeleznik, the news director of WNKU-FM, is acting fairly calm.

“Plans to celebrate? Me personally? I don’t know,” Zeleznik said. Even the thought of a night out in honor of the first day of broadcast on April 29, 1985 seems to surprise her.

“We’ve sort of been celebrating…with the fund drive, and people have been kind enough to write a lot of articles, talk about it and sort of put me down memory lane,” Zeleznik says.

Celebrating the upcoming broadcast anniversary through work fits Zeleznik’s style. She’s devoted to her craft, and the awards and accolades she receives are a result of that commitment.

“I would say Maryanne’s work ethic is second to none,” said WNKU news reporter and producer Jay Hanselman. Hanselman has worked with Zeleznik full time for the last 10 years.

“She will do whatever it takes to get an assignment done,” Hanselman said. “If that means that she’s here at 4:30 in the morning, and if there are times that she has to be here until five or six in the evening, she never complains about doing that.”

News awards that she and Hanselman have received from the Ohio and the Kentucky Associated Press Broadcasters, the Ohio Society of Professional Journalists, Public Radio News Directors, Inc. and other professional organizations choke the walls in the station’s reception area. Thirty-eight plaques are displayed with another seven cut-glass trophies standing on top of the staff’s mail bins.

Grady Kirkpatrick, the station’s program director, admits that the station has run out of room to display them all.

“Maryanne has all the qualities necessary to be an effective journalist – curiosity, a lot of enthusiasm and a ‘nose for news.'”

These same qualities have helped her forge a trusting relationship with the news staff at National Public Radio, who frequently call on Zeleznik to cover local stories. She marks the 1997 floods in Falmouth as her most memorable report.

“It was one of the most tragic, yet heartwarming stories that we’ve ever covered,” Zeleznik said. “I’ve never seen anything like that in my life.”

She was struck by the devastation of the floods, but inspired by the way residents rebuilt their town and their lives.

Rick Pender, the arts and entertainment editor at Cincinnati CityBeat was the first general manager at WNKU. He hired Zeleznik, then a 23-year-old Miami University graduate to manage the news department.

Pender compares it to being dropped into the middle of a hurricane.

“Up until just a few days before we went on the air, we were still installing equipment,” Pender said. “That morning when we started broadcasting at 5:30, I thought, ‘Boy, I hope this all works.’ And I’m sure she felt the same way.”

The Lorain, Ohio native wasn’t always headed for a career in broadcasting. She considered psychiatry and law as possible career options, but tentatively settled on communications. A course in broadcast newswriting that required a volunteer stint at Miami University’s radio station cemented the deal for her. She admits that she was always interested in the performing aspects of radio work, but the surprise for her came when she realized that she enjoyed gathering the news.

“I worked 10 hours a week there,” Zeleznik said. “I started doing the morning news and discovered, ‘Hey, I kind of like this!’ And it sort of went from there.”

“Public radio is always going to do a different kind of news and more in-depth coverage,” Zeleznik says. And I think public radio has a lot of respect, so you just sort of have to educate people sometimes. Just remind them that you’re there.”

In the studio, Zeleznik and Hanselman often rib each other. Hanselman told listeners if they didn’t meet their pledge goal he planned on bringing in his kazoo and playing a few tunes. Zeleznik pleaded with WNKU fans to “pllleeeaaassse call in!”

“She’s a real high energy person… although she bridles it down effectively when she’s doing her newscast,” Pender said. “But things like fund-raisers always bring out the “best” I guess we’ll call it.”

Zeleznik admits that what you see is what you get.

“That’s kind of who I am,” she said. “I tend to be an optimistic, positive person, and I think that generally you got to have that excitement to do this kind of work.”

All of that high energy these days is not just devoted to fund drives and the news room. Zeleznik is also an adjunct professor in NKU’s communication department where she teaches broadcast newswriting.

“It gives me a chance to help mold future broadcast newswriters, and frequently get students to work in our news room,” Zeleznik said. “I like being able to introduce students to the writing and just what the job is about.