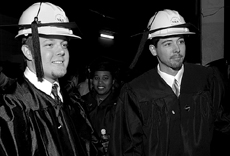 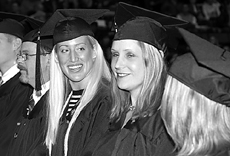 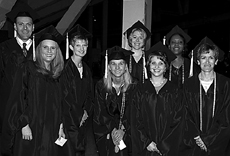 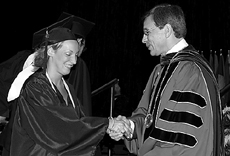 * Graduates must arrive at the U.S. Bank Arena no later than 8:30 a.m. Enter the arena via the street-level doors off Broadway. * Each graduate should obtain a name card that indicates seating according to college and degree at designated tables in the assembly area. * All personal belongings should be left with guests.

* Guests should enter at the Concourse level gates. * Tickets are not necessary for commencement. Seating is available on a first-come-first-served basis. * The ceremony begins promptly at 10 a.m.

* Photographs will be taken by a professional from Chappell Studios during the ceremony. * Guests may take photos at a special section near the stage.

* Academic apparel must be purchased by each graduate at the NKU Bookstore by May 6. * Undergraduate students graduating with honors will receive a cord to wear with the apparel. Cords can be picked up prior to May 6 or at commencement. * Master’s degree candidates must have the appropriate hood for the degree.

* Diplomas will be mailed to graduates after May 27. * Graduates are asked to verify their permanent mailing addresses listed on Norse Express.

Information compiled from NKU’s Web site at www.nku.edu and the U.S. Bank Arena site at www.usbankarena.com

U.S. Bank Arena is located on the Ohio River next to the Great American Ballpark.

From I-71/75 North: Take the Second Street exit. Stay in the right lane and follow Second Street until it ends at Pete Rose Way, right in front of U.S. Bank Arena.

From I-471 North: Stay in right lane across bridge. Follow North I-75/West US 50 exit. Stay right and exit on 3rd Street. Turn left at first light onto Broadway. U.S. Bank Arena is at the corner of Broadway and Pete Rose Way.